Natural selection in our time

Last month in Nature Reviews Genetics there was a paper, Measuring selection in contemporary human populations, which reviewed data from various surveys in an attempt to adduce the current trajectory of human evolution. The review didn't find anything revolutionary, but it was interesting to see where we're at. If you read this weblog you probably accept a priori that it's highly unlikely that evolution "has stopped" because infant mortality has declined sharply across developed, and developing, nations. Evolution understood as change in gene frequencies will continue because there will be sample variance in the proportions of given alleles from generation to generation. But more interestingly adaptive evolution driven by change in mean values of heritable phenotypes through natural selection will also continue, assuming: 1) There is variance in reproductive fitness 2) That that variance is correlated with a phenotype 3) That those phenotypes are at all heritable. In other words, phenotypic variation tracks genotypic variation Obviously there is variance in reproductive fitness. Additionally, most people have the intuition that particular traits are correlated with fecundity, whether it be social-cultural identities, or personality characteristics. The main issue is probably #3. It is a robust finding for example that in developed societies the religious tend to have more children than the irreligious. If there is an innate predisposition to religiosity, and there is some research which suggests modest heritability, then all things being equal the population would presumably be shifting toward greater innate predisposition toward religion as time passes. I do believe religiosity is heritable to some extent. More precisely I think there are particular psychological traits which make supernatural claims more plausible for some than others, and, those traits themselves are partially determined by biology. But obviously even if we think that religious inclination is partially heritable in a biological sense, it is also heritable in the familial sense of values passed from one generation to the next, and in a broader cultural context of norms imposed from on high. In other words, when it comes to these sorts of phenotypic analyses

we shouldn't get too carried away with clean genetic logics.

In Shall the Religious Inherit the Earth? Eric Kaufmann notes that it is in the most secular nations that the fertility gap between the religious and irreligious is greatest, and therefore selection for religiosity would be strongest in nations such as Sweden, not Saudi Arabia. But as a practical matter biologically driven shifts in trait value in this case pales in comparison to the effect of strong cultural norms for religiosity. Below are two of the topline tables which show the traits which are currently subject to natural selection. A + sign indicates that there is natural selection for higher values of the trait, and a - sign the inverse. An s indicates stabilizing selection, which tells you that median values have higher fitnesses than the extremes. The number of stars is proportional to statistical significance. 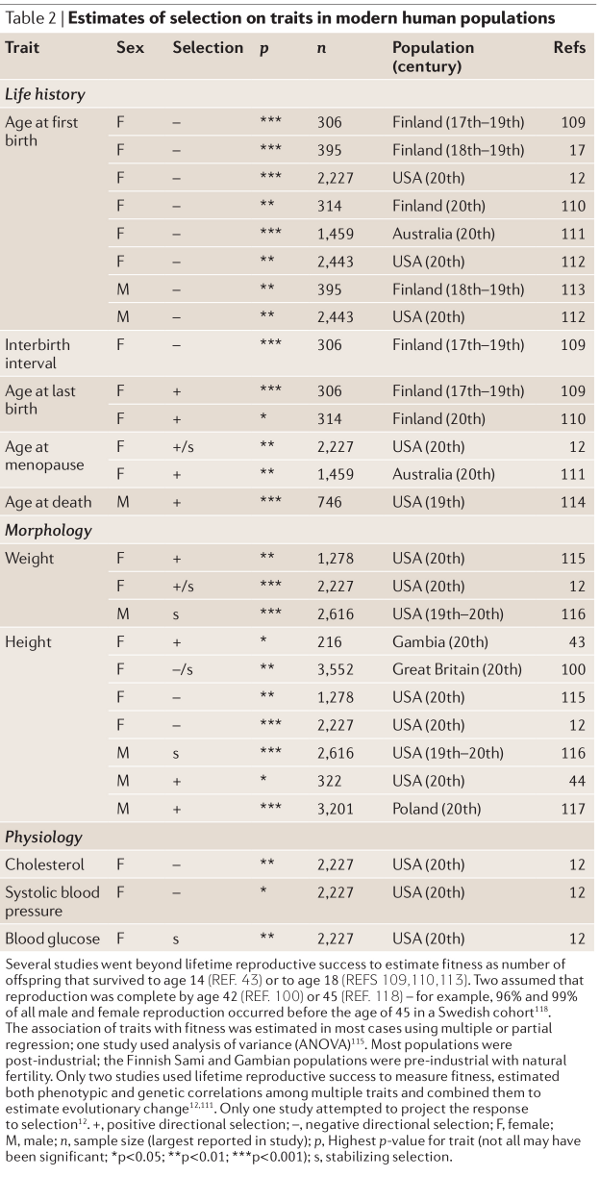 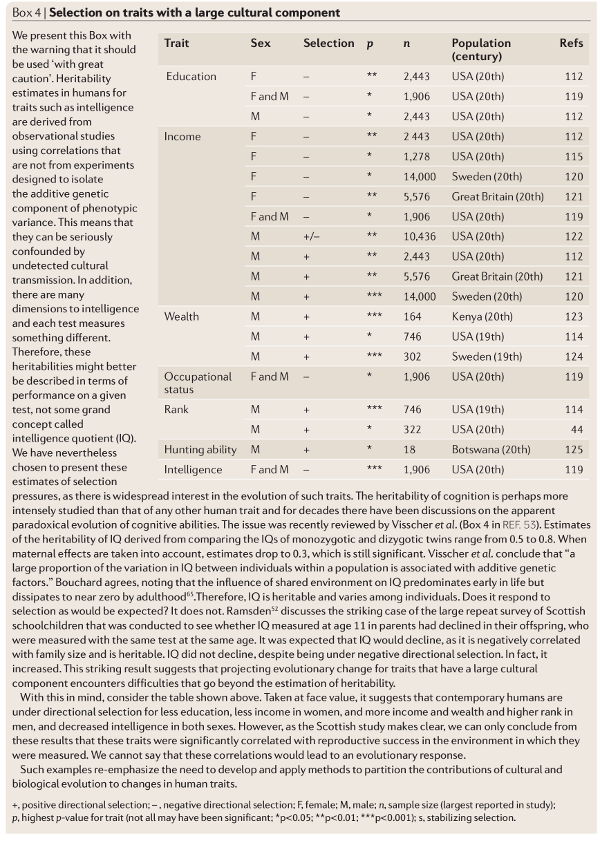 Some of this is not surprising. The age of the onset of menarche has been dropping in much of the world. I suspect this is mostly due to better nutrition, but a consequence of this shift is earlier fertility for some females. The authors are nervous about the robust correlation of higher fertility with lower intelligence, but notice that the pattern for wealth and income is different and more complicated. The key is to look at education. Whether you believe intelligence exists or not in any substantive concrete sense, those who are more intelligent are more likely to have had more education, and there's a rather common sense reason why investing in more schooling would reduce your fertility: you simply forgo some of your peak reproductive years, especially if you're female. The higher you go up the educational ladder the stronger the anti-natalist cultural and practical pressures become (the latter is a heavier burden for females because of their biological centrality in child-bearing, but both males and females are subject to the former). As with religion even if the differences have no biological implication because you believe the correlations are spurious or reject the existence of the trait one presumes that parents and subcultures pass on values to offspring. If higher education has anti-natalist correlations we shouldn't be surprised if subsequent generations turn away from higher education. Their parents were the ones who were more likely to avoid it. We live in interesting times.