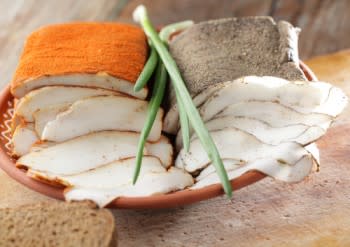 Bacon gets all the internet glory

, but its more old-fashioned cousin salt pork may actually be good for you---for your nosebleeds, if not your waistline. Doctors recently used strips of cured salt pork to stop a life-threatening nosebleed. One of the doctors remembered the unconventional treatment from a field manual he saw in his military days, after exhausting all medical treatments short of risky surgeries. The patient was a four-year-old girl with Glanzmann thrombasthenia

, a rare blood disorder where her platelets are unable to do their normal job of blood clotting. Surgery and injection of blood coagulation proteins didn't stop her bleeding after more than a week, so the doctors turned to something untested and low tech: "Cured salted pork crafted as a nasal tampon and packed within the nasal vaults successfully stopped nasal hemorrhage promptly, effectively, and without sequelae," they wrote in a paper about the episode

. While "nasal tampon" may sound distinctly undelicious as a pork product, it worked---not once, but twice, as a cure. When the girl re-injured herself four weeks later, the doctors stuffed salt pork up her nose again and she was home in less than 72 hours. Now we all know that pork fat is tasty, but what does it have to do with stopping nosebleeds? The salt pork remedy has been around for several decades, reported by Dr. Alfred Jared Cone

at a meeting of the American Laryngological, Rhinological, and Otological Society in 1940. It was thought that salt from the pork draws water to the nasal tissues, making them swell up and squeeze close the broken blood vessels. The doctors in this study add that the salt pork may contain proteins that help blood coagulate, though the exact mechanism of how it stops bleeding is still unknown. Bacon enthusiasts should note that salt pork is not the same thing as bacon: Salt pork contains more fat and is not smoked. So don't take this as affirmation that "Bacon is good for me

because potential bacteria and parasites in the raw meat would be all too happy to find their way into a bleeding nose-wound. You're probably better off pinching your nose

and grabbing some nasal decongestant spray, though that presents fewer opportunities for leftovers. [via The Guardian