Mysterious Cambodian Disease May Have a Name. But Why Is It So Lethal? 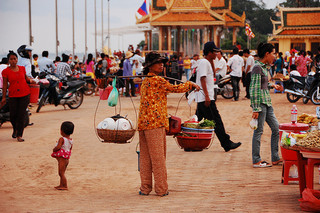 A marketplace on the Mekong River

Last week, the World Health Organization reported that an unknown respiratory disease was killing children in Cambodia at terrifying rates

. The latest word is that of the 59 kids admitted to hospitals with the disease since April, 52 have died. Mara Hvistendahl at ScienceInsiderhas corresponded with the team of virologists in Phnom Penh

who are working to identify the illness, and while the diagnosis isn't certain, they say that they've found signs of Enterovirus 71 in cerebrospinal fluid from 15 patients. Enterovirus 71 is one of the causes of hand, foot, and mouth disease

, a usually benign childhood infection that causes a rash, vomiting, and other symptoms. The disease is very common and usually clears up in a week or so, and, as with most viral infections, has no cure to speak of. A small proportion of patients with hand, foot, and mouth disease (not to be confused, incidentally, with foot and mouth disease, a livestock infection) do develop neurological complications that can put them in the hospital and even kill them. But, as Hvistendahl points out, the statistics in the Cambodian outbreak are a little odd. Cambodia is a small country, about 15 million people, and for this many kids to be developing complications and dying of them, a truly large chunk of the population would have to be infected. To put that in perspective, neighboring Vietnam, which had an outbreak of the disease earlier this year, has more than 86 million people and reported only 20 deaths. Health officials don't know how many people in Cambodia have the disease, nor do the virologists know whether there's anything unusual about this strain of Enterovirus 71. It's on their list to find out, though, as they culture more samples and prepare to sequence the strain's genome. [via ScienceInsider