My parents, looking east and west

Yesterday Michelle decided to put up a post with her own analysis of her ADMIXTURE results. With that in mind, I thought I'd revisit some results from my parents. After many runs of ADMIXTURE, both by myself and Zack, some consistent differences seem to crop up. To review, one of the big surprises from genotyping my parents is that both of them have about the same "East Asian" element of ancestry which is very distinctive from the conventional South Asian mix. Because both of my parents lack any oral history of recent admixture I posited that this element may be a uniform substrate common among eastern Bengalis, and that it was absorbed during the initial period of settlement and demographic expansion on the frontier in the period between 1000-1500 A.D. By analogy, low levels of Amerindian admixture persist across Brazilians, and African admixture among Mexicans, but because the admixture dates back several hundred years it does not seem to have percolated down to the present in oral history (though some old stock Brazilians of predominantly Portuguese origin have been able to infer Amerindian ancestry by looking at the church marriage records of their ancestors, and adducing that some women were natives due to common baptismal names given to such converts). Since ADMIXTURE is sensitive to the genetic variance you throw into it in extracting out patterns, I created two pools with my parents in it. One was predominantly West Eurasian, and another was predominantly East Eurasian. In both samples my parents were Bengali A (father) and Bengali B (mother), and I included in the Gujarati_B and Pathan South Asian populations. Gujarati_B because it seems particularly South Asian, and therefore informative. The Pathan sample has less African admixture than the Sindhis or Makranis, and is not so isolated as the Kalash, Brahui, Burusho, and Baloch. For the East Eurasian sample I included Sardinians as the West Eurasian outgroup, while for the West Eurasians I included Japanese as the outgroup. Finally, I pruned the markers down to 65,000 SNPs. Below I report K = 6, as cross-validation determined that to be the optimal value for the number of populations. First, West Eurasians: 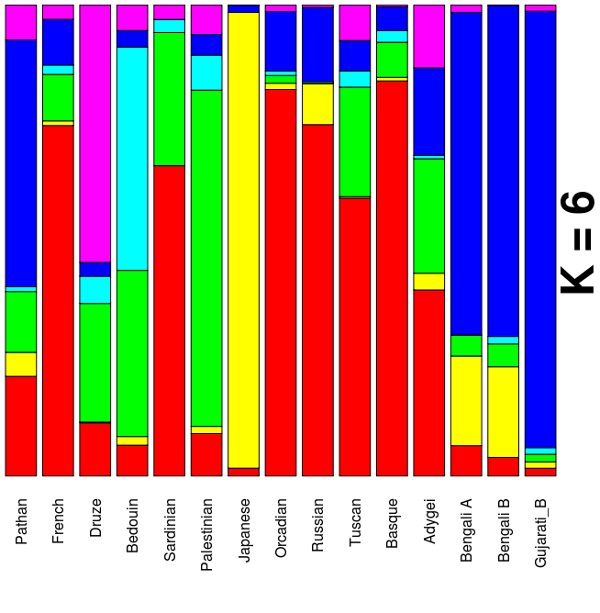 The blue element is clearly South Asian. I assume that the shared aspect of this component with other West Eurasians is mostly due to what Reich et al. term "Ancient North Indian," which I believe to be exogenous to the subcontinent, at least on the time scale of 10,000 years or so. The yellow represents all of East Asia. My parents are equivalent, and there is a minor element of this in the Pathans (actually, it is only a few individuals if you look at the data in a more fine-grained fashion). Because I constrained the data set to West Eurasians it isn't too surprising to me that many of the remaining K's are divided between geographically close Middle Eastern groups. They're more genetically diverse than Europeans. First, red is representing something common in Europeans. The next K is Palestinian, then Bedouin, and finally Druze. Seeing that the Druze component is more evident in the Adygei, from the Caucasus, than the neighboring Arab populations, I think it's really pointing to a more northern West Asian element (though it is probably not identical to that element). The Palestinian modal component is representing the southern branch. There's absolutely no surprise that my father has more of the European element than my mother, and that he has the Druze element which my mother lacks. I assume this is a signal to the trans-Caucasian connection which many South Asians have, and in which my father is always elevated vis-a-vis my mother. Another not unexpected result is that my mother has more of the southern Middle Eastern components. This seems another consistent trend, insofar as she keeps popping up with traces of these components which my father lacks connecting her to Southwest Asia. This last part is easy to reconcile with oral history: my mother's maternal grandfather was from a family with presumed Middle Eastern ancestry. This was obviously a minor component even by his generation. Before settling in Bengal they had been resident in Delhi, so they'd probably already intermarried with Indians to the point where it was the predominant component of their heritage by the time they migrated. Next, let's look at East Eurasians: 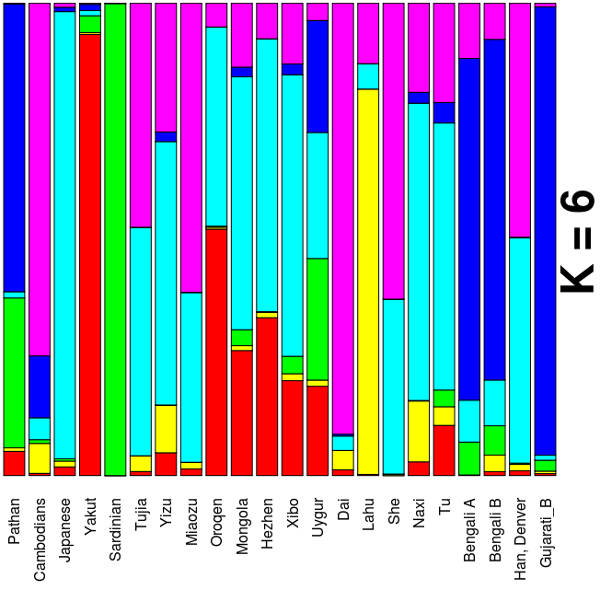 All of West Eurasia is now green, while regular blue is South Asian. The remaining K's represent eastern populations. One thing to note is that eastern elements remain very trace in the Gujaratis. In contrast, as expected they're well represented in my parents, but also among the Pathans. But there's a big difference between my parents and the Pathans: the eastern element among the Pathans is overwhelmingly similar to that of the Yakut, while in my parents that is a trace aspect. Rather, my father's eastern ancestry looks equivalent to South Chinese groups. My mother has a somewhat different mix, with less Dai, but the presence of a Lahu component. The Dai and Lahu are both present in the southwest Chinese province of Yunnan, though both groups spill over into mainland Southeast Asia (the Dai are the closely related to the Thai people of Laos and Thailand, while the Lahu have co-ethnics in Burma). The distinctiveness of these groups may be an artifact of particular admixture events, or simply because they are relatively inbred. But, the difference between my parents does make me wonder about whether their eastern ancestry is shared common deep admixture. That is probably still true, but it seems plausible that there have been more recent admixture events, in particular with my mother. Finally, the contrast between my parents and Pathans is instructive. North Indian Islam has Turkic cultural roots, insofar as Sunni Muslims follow the Hanafi legal code, and the Mughals were originally Turco-Mongol. This influence seems to be genetically evident in some Pathans. The Yakuts are the most northeastern Turkic population, and likely reside near the Turkic urheimat. In contrast, despite my parents' Muslim religion, they lack any biological connection to this bio-cultural intrusion into the Indian subcontinent which has been so significant. The Middle Eastern ancestry which my mother has, I would bet, the primary avenue by which she has Turkic heritage, unless it is simply background noise. Looking at the amateur genomics projects which have been done over the past 6 months it seems a consistent and robust trend that people of Muslim background from the Middle East have traces of Sub-Saharan and East Eurasian ancestry which non-Muslims from the region lack. This is surely the impact of Islamic slavery, of Turks and blacks. Here are my parents' ancestral quanta close up: 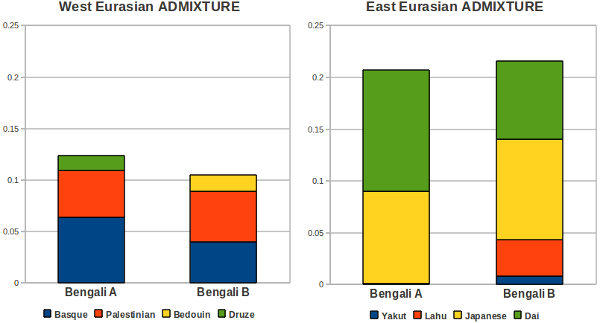 Finally, here's some multidimensional scaling plots which visualize the genetic distance between these putative ancestral groups. Remember that the labels I give them are for guidance only, and not to be taken literally!

The next step is to find matches between my parents and various populations at the level of chromosomal segments.