A few days ago Dienekes opened up the Dodecad project to a wider range of Eurasians. I decided to send my 23andMe sample to Dienekes ASAP, and the results came back today. I'm DOD075. Dienekes also just put up an explanation of the 10 ancestral components he's generating from ADMIXTURE (along with tree-like representations of their distances). Below I've placed myself in the more local context of populations to which I'm close to: 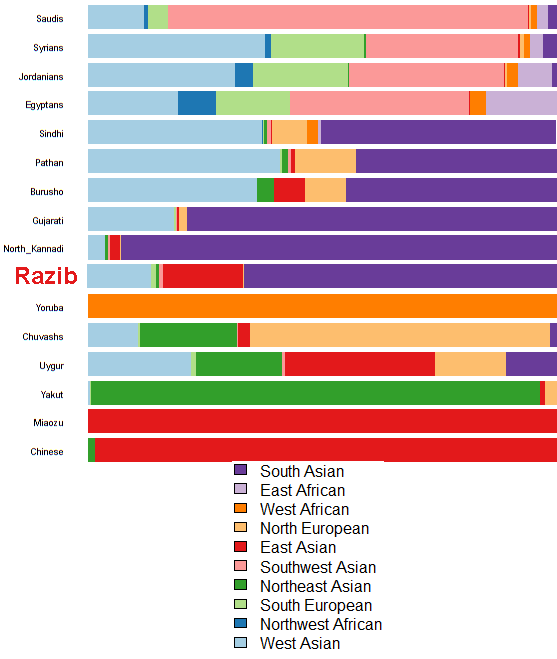 Here are all the populations. Karnataka is a state in northwest South India, and can be taken as somewhat representative of the Dravidian populations. The purple component is a South Asia distinctive element. Using the terminology of Reich et al. it would be the ancient stabilized hybrid population which came out of the admixture of Ancient North Indians (ANI) and Ancient South Indians (ASI). On the margins I assume there's just noise popping out; e.g., the "East Asian" sliver among the Kannada speakers from South India. On the other hand, the Burusho have shown evidence of East Asian admixture in other studies I've seen. They have a bit of the derived East Asian EDAR variant for example. As for me, no surprisethat I have a lot of "East Asian" for a South Asian. Since Dienekes is more interested in Western Eurasia he didn't go to the point of dividing the East Asians into a northern and southern branch. I'm pretty sure I'd be in the southern branch, along with the Miaozu sample (more well known as Hmong to Americans). The bigger question is how atypical for an east South Asian I am. There is a certain basal load of East Asian ancestry among northeast South Asian Indo-Aryan speakers. Another question is whether my East Asian component can be attributed to the Mundari substrate absorbed by Indo-Aryans in northeast India, or by a more recent admixture of Tibeto-Burmans. Some of both surely, but knowing my family's long residence on the eastern margins of the Indo-Aryan speaking domains of South Asia, cheek-by-jowl with Tibeto-Burmans, I believe I am likely to have some recent Burmese ancestry. Specifically through my paternal grandfather. Finally, though it is just as likely to be nothing, I have a bit more "Southern European" than the other South Asians. I assume this is from my great-grandfather who was from Delhi, and part of the polyglot Muslim religious intellectual class of that city. His physical type, which my maternal grandmother inherited, was clearly West Asian. He probably had non-trivial Persian or Central Asian ancestry.