Mutant Mice Chirp Like Birds. So What Are They Saying? 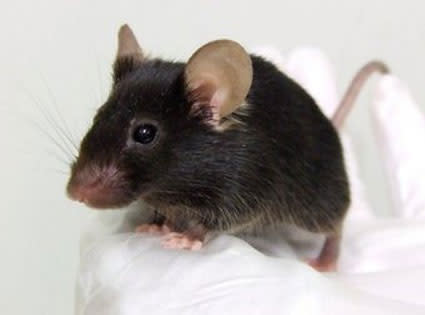 It's furry like a mouse but sings like a bird. What is it? It's a mutant mouse developed by the genetic engineers at the University of Osaka that is able to tweet and chip like a bird, instead of a mouse's normal squeak. Like dog breeders, who actively select for certain traits (like size, hair color, or disposition) the researchers from the Evolved Mouse Project crossbred their mutant mice to select for various traits. When they find one they like, like this singing mouse or the one that looks like a miniature Dachshund, they breed them until they have a sizable breeding stock of animals to establish a new breed. The research group currently has over a hundred singing mice (it must get noisy in those labs) and they are continuing to study how they use their chirps, researcher Arikuni Uchimura told the AFP:

"Mice are better than birds to study because they are mammals and much closer to humans in their brain structures and other biological aspects," Uchimura said. "We are watching how a mouse that emits new sounds would affect ordinary mice in the same group... in other words if it has social connotations."

Uchimura said their chirps "may be some sort of expressions of their emotions or bodily conditions." The team has found that ordinary mice that grew up with singing mice emitted fewer ultrasounds than others, which could indicate that communication methods can spread in the same group like a dialect.

While the mouse sounds really interesting and could give researchers insight into what genes control sound and possibly language production, studies of the mouse haven't yet been published in a peer-review journal; so far the news comes directly from the researchers themselves. I'm a little skeptical to jump to any conclusions about how useful they will be: the ability to make bird-like sounds doesn't necessarily come with the social and psychological changes that would let mice can use those sounds to communicate in the ways that birds do. Now, if only they could get to work on those mutant turtles

we've been hearing about. Related content: Discoblog: Turning a Mouse Into a Bat(-Like Weirdo) in One Easy Step

Discoblog: Scientists Milking Mice for All the Human Milk Protein They’ve Got

80beats: Will Venter’s “Synthetic Cell” Patents Give Him a Research Monopoly?