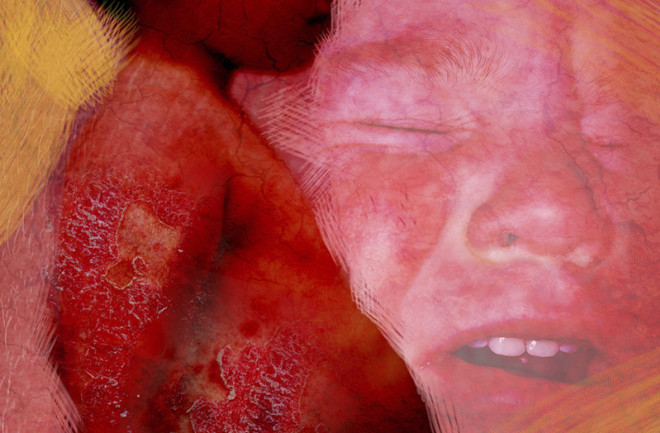 The toddler wriggled across the exam table, laughing as he crinkled its paper covering. His grandmother JoAnne scooped him onto her lap, rubbing his back as he sucked his thumb. She lifted his hospital gown and unfastened his diaper, showing us the raw skin beneath. Teary-eyed, she told me and another pediatrician the story of his rash.

About a year earlier, JoAnne had received full custody of 2-year-old Calvin when his parents, struggling with drug addiction, could no longer adequately care for him. The child seemed healthy, just “hard-headed” and prone to tantrums, JoAnne said. Though tight on money, the grandmother was determined to be a good surrogate parent.

Three months after JoAnne received custody, scaly red patches appeared on Calvin’s groin. A primary care doctor prescribed an antifungal ointment. For a month, JoAnne lathered it on with every diaper change, but the rash got redder and rawer. She returned to the doctor, who advised a stronger antifungal cream and a topical antibiotic. But there was no relief, and the rash spread to Calvin’s face, inner thighs and lower back. He scratched constantly, crying himself to sleep each night.

His skin was the worst I’d ever seen.

Desperate, JoAnne brought him to a hospital emergency room, where he was given oral antibiotics and a referral to a dermatologist. That doctor diagnosed eczema and prescribed steroid ointments, both ineffective. Still, JoAnne hoped the prescribed moisturizing regimen would work. She rubbed thick coats of Vaseline on Calvin, then squeezed him into wet pajamas with another layer of dry pajamas on top. The symptoms remained.

A visit to another dermatologist resulted in prescriptions for stronger steroids and other antibiotics and moisturizers. But none worked. Calvin then went through a bout of watery diarrhea.

That’s when JoAnne brought Calvin to my pediatric team. The rash was terrible. His buttocks, thighs, groin and mouth area were bright red and raw, the skin dry and flaky in some places, wet in others. His skin was the worst I’d ever seen.

Calvin had other symptoms. His hair was thin and patchy. His eyebrows and eyelashes were thin, his lips cracked, his tongue bright red and his gums bloody. His belly protruded, and his legs were swollen up to the shins. JoAnne said these conditions had appeared in the last few months.

“What does he eat generally?” I asked.

She rolled her eyes and sighed. “He is so picky,” she said. “It’s a struggle. Since he moved in with me, I can’t get him to eat anything. All he’ll take is teething biscuits and chamomile tea — he likes it a little sweet — drinks three bottles a day.”

One of my colleagues recognized Calvin’s symptoms from her years abroad caring for children in areas with famine. Calvin was starving.

Tests showed that Calvin’s body lacked several key nutrients. One was zinc. People with zinc deficiency can have rashes resistant to topical treatment. The mineral, found in many foods (meat, seafood, beans, nuts, grains) is essential to good health. A key cofactor for dozens of enzymes, zinc helps the body heal wounds, synthesize DNA, divide cells, make proteins and operate the immune system. Our bodies are unable to store it, so we must eat it daily. Other symptoms of zinc deficiency are changes in hair texture, profuse diarrhea and stunted growth.

Meanwhile, Calvin’s lack of protein had swollen his abdomen and legs, a particular type of malnutrition called kwashiorkor. Lack of vitamin C had caused his gums to bleed. Vitamin B12 deficiency had cracked his lips and reddened his tongue. Blood tests revealed immature and irregularly shaped red blood cells, deprived of iron and vitamin B9, or folate. X-rays showed bones bowed and fraying from growing without enough vitamin D.

Calvin needed to eat, but carefully. After long starvation, the body can be overwhelmed by nutrition, triggering a dangerous condition called refeeding syndrome. In changing from a state of fasting to eating, secretion of insulin and synthesis of fats and proteins can disturb levels of phosphate, magnesium and potassium. The heart requires normal levels of these electrolytes to keep pumping and beating normally. Too much food too fast can actually kill.

We admitted Calvin to the hospital for observation and treated him with targeted vitamin supplementation and a healthful diet. Though Calvin’s grin was charming, his mealtime hospital behavior was less so. He fought food, pushing it away, then flinging it wildly and splotching the walls with pureed carrot, globs of banana and sticky pasta. He refused food with specific textures, colors and temperatures.

It was clear that he had developmental delays that made it difficult for anyone to feed him. His grandmother was overwhelmed and lacked proper health-services support for a child with special needs. We enlisted a feeding therapist and child life specialists, who brought discipline and creative ways to make meals appealing; for example, food was made in various shapes and colors and served with sauces and dips. They helped Calvin explore new foods and taught JoAnne how to establish an engaging mealtime routine. Over weeks, with his grandma’s help, Calvin became a voracious eater.

Thanks to vitamin supplements and feeding therapy, his rash disappeared in a week. His bones strengthened. His weight increased steadily. His energy skyrocketed. We soon had trouble containing him; he preferred skipping down the hospital halls and playing hide and seek at the nurses’ station.

Why did Calvin’s problems take so long to diagnose? Perhaps because his doctors were so specialized, they didn’t step back to ask what else might be going on with him. The boy also had relatively few follow-up exams, making it difficult to probe for other causes of his condition.

After his release from the hospital, Calvin began seeing a pediatrician who got to know him. He also was diagnosed with developmental delays in his learning, language and motor skills, probably related to in utero substance exposure and the unstable household he lived in during his first year. The issues were mostly resolved through improved diet and behavioral therapy.

The boy’s life went from painful rashes and food tantrums to a full belly and professional support for his challenges. Grandma’s house became a much sweeter home.