Another paper on European phyogeography, Investigation of the fine structure of European populations with applications to disease association studies:

An investigation into fine-scale European population structure was carried out using high-density genetic variation on nearly 6000 individuals originating from across Europe. The individuals were collected as control samples and were genotyped with more than 300 000 SNPs in genome-wide association studies using the Illumina Infinium platform. A major East-West gradient from Russian (Moscow) samples to Spanish samples was identified as the first principal component (PC) of the genetic diversity. The second PC identified a North-South gradient from Norway and Sweden to Romania and Spain...The next 18 PCs also accounted for a significant proportion of genetic diversity observed in the sample. We present a method to predict the ethnic origin of samples by comparing the sample genotypes with those from a reference set of samples of known origin. These predictions can be performed using just summary information on the known samples, and individual genotype data are not required. We discuss issues raised by these data and analyses for association studies including the matching of case-only cohorts to appropriate pre-collected control samples for genome-wide association studies.

Below the fold is a PC map where I've added clarifying labels. 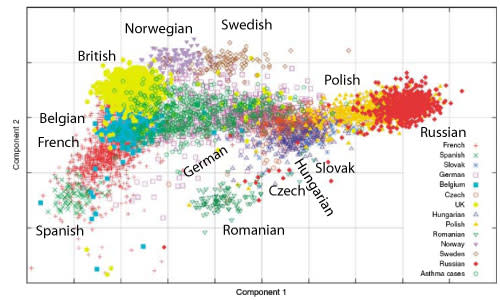 But there's another fascinating map which I think needs to be highlighted. 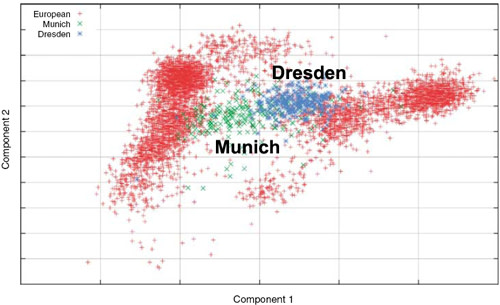 As you can see, there is population substructure within Germany. We need to map these things out now before the EU mobility wipes clear many of the historical information signals. These data will be a great boon to historians trying to understand the patterns of ethnogenesis in pre-modern Europe. There are textual support for the contention that the medieval German drive to the east resulted in the Germanization of many West Slavic peoples, these sorts of data can test these hypotheses. Finally, I'll leave you with this comment from Dienekes:

Once again, it is clear that members of particular nations can mostly be mistaken for members of their closest neighbors. Almost all Spaniards are guessed as French; French mostly as Belgians but with sizable Spanish and UK minorities; UK as Belgians but with sizable French minorities; Norwegians mostly as Swedes but with some UK; Swedes mainly as Germans but many as Norwegians; most Poles as Russians, but some Slovaks or Czechs, and so on. The importance of these results can't be underestimated. While it can be argued that some ethnic groups are spuriously distinctive only due to insufficient sampling of the geographical continuum, it is more difficult to do this for others. For example, it is now possible to identify particular ethnic groups, e.g., Norwegians, with great accuracy from DNA. More markers and more populations will doubtlessly enhance our ability to distinguish European nations using DNA. But perfect accuracy is unlikely; in most European nations there are probably minorities which -for historical reasons- allied themselves with one country or political entity even though they were ultimately of different genetic background than the majority population of that entity. Nonetheless, at a time when -due to a sort of mental hysteresis- proclamations that "races are social constructs" are still routinely made, the discovery that not only races, but even closely related ethnic groups (e.g. Norwegians and Swedes) can be distinguished with greater than 90% accuracy, serves to illustrate the scientific irrelevance of the ethnic nihilists and the affirmation that nations are, at least in part, genetic entities.

If you read the paper you can see that the differences between European nationalities are very small, especially in a worldwide context. But that does not mean that they are trivial when it comes to giving us information about population structure. Related:The Genetic Map of Europe, Genetic map of Europe; genes vary as a function of distance and Finns as European outliers.