In the post below on Bryan Caplan's arguments for why one should have more children there was an "interesting" comment:

As if we’re harmless little creatures at one with our environment and put no toll on the balance of nature around us. Funny how we humans act like mindless rabbits and lemmings and put the sole unintelligent directive of our DNA as the mouth of god. Men most interestingly in power or self described intellectuals after sitting around picking belly lint and jerking off in praise of their penises find clever monkey justifications (patriarchal religions mostly) for more more more babies and women must be subservient to male sexual needs and demands of more babies. See a huge male god said so. Funny how women mostly never jump on the soapbox bandwagon of wanting to pop out tons of kids, just male spermatozoa fed rants formed by the human male organism to insist his natural inclination is the word of gawd. If you can’t use holy massive penised Jehovah to instill this dreck then dream up socio-biological propaganda for the atheist hip guys needing a good shagging with their female cohorts.

Ignoring the weirdness of much the comment, is it true that men are more pro-natalist than women? I have shown that there seems to be a trend within the last 10 years of preference for larger families. What's the sex breakdown for this? The correlation between men and women is 0.65 year-to-year in their mean for ideal number of children. About 43% of the variance of the trend over the years can be predicted from one sex to the other. Is there is a systematic difference? Here's a chart: 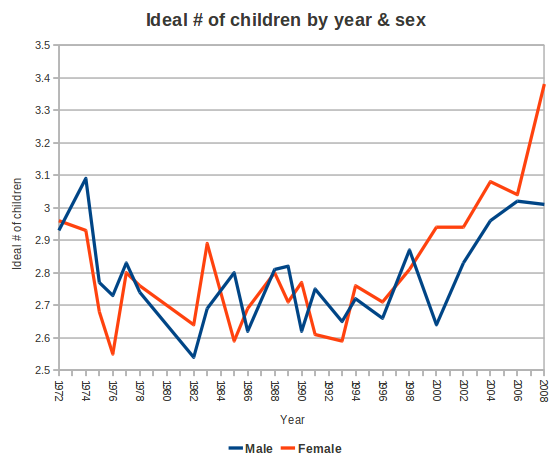 The period before 1998 is rather noisy overall. The correlation actually increases after '98 because of the concurrent upward trend. That being said, it looks like the pro-natalist bias is more accentuated among women than men. If I constrain the years to the 2000s, and age range to 18-30, the mean ideal number of children for men is 2.88 and for women it is 3.03. These data indicate that in fact Bryan Caplan marches with the sisterhood on this issue.