Mom Was Right: You'll Catch a Cold from Being Cold

Researchers studying the rhinovirus — the common cold virus — have found a link between temperature and our body’s ability to fight a cold. 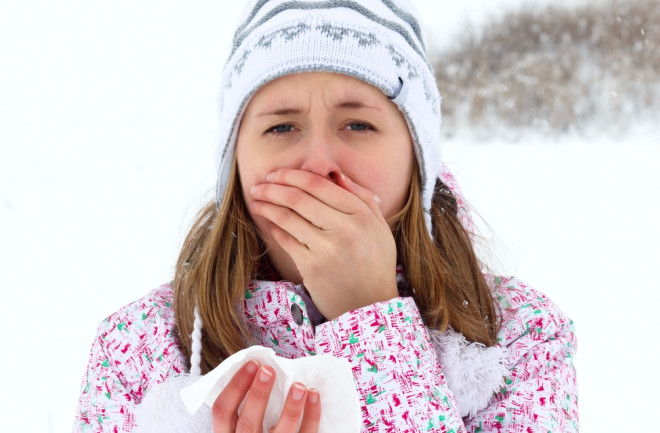 “Put on a jacket or you’ll catch a cold.”

Countless energetic children are told this every day as they zoom outside for playtime. But as kids grow up, this bit of advice is usually dismissed as an age-old, superstitious epithet. A virus, not the temperature, is what makes us sick, right? Well yes. But it turns out mom’s advice contains a kernel of truth too.

Yale researchers studying the rhinovirus — the common cold virus — have found a link between temperature and our body’s ability to fight a cold. The colder we get, the easier it is for the rhinovirus to trounce us into sniffling, sneezing defeat.

No Wonder It’s Called a Cold

When human rhinoviruses were first cultured way back in the 1960s, researchers noted that the virus replicated more efficiently in temperatures just below core body temperature. Specifically, the virus thrives when temperatures are 91 to 95 degrees Fahrenheit, but slows its replication when temps hit 98.6 degrees.

Roughly one in five people carry the rhinovirus at any given time in the tissues of the nasal passages. The prefix “rhin” in Greek literally means “the nose,” so the common cold is aptly named. Most of the time, our bodies win the fight against the rhinovirus, and sometimes we lose — but why?

The relationship between temperature and rhinoviruses is well established, but the link between our immune response and temperature hasn’t been studied. So, researchers set out to see if, like the rhinovirus, our immune system is also sensitive to changes in our body’s thermostat.

Turn Up The (Cough) Heat

Researchers used a mouse-adapted version of the virus and tested it on cells taken from mouse airways, such as the nose and lungs. They incubated the virus and airway cells at 91 degrees in one batch, and at 98.6 degrees in another batch. To detect the cells’ immune response researchers measured gene activation and chemical signaling within the cells.

They found that the cells stored at 98.6 degrees launched a more robust immune attack than the ones at 91 degrees. The findings, published Tuesday in Proceedings of the National Academy of Sciences, indicate that exposure to cold air might lower our bodies’ ability to fight the common cold. And while most of us can power through a cold, people with respiratory issues or impaired immune systems may have a harder time fighting off the virus.

So heed your parents’ advice and bundle up — you’ll catch a cold if you don’t.