Molecules as more than markers 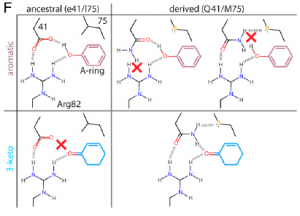 Genetics has numerous uses. There are some biologists for whom genetics implies very specific chemical and physical properties of a particular flavor of DNA molecule. Consider a scientist focused on the biophysical properties of zinc finger proteins and the ZYF gene. Then there are biologists for whom genetics is a more abstract and evolutionary enterprise. David Haig and the late W. D. Hamilton fall into this class of thinkers. This is a way of looking at genetics as the scaffold or currency of evolutionary process. Finally, there are those for whom genes are simply discrete convenient markers to trace out historical and spatial patterns. The field of molecular ecology describes this attitude, though the application of phylogenetic techniques from the life sciences in linguistics illustrates the generality of these methodologies. A new paper in PNAS, Biophysical mechanisms for large-effect mutations in the evolution of steroid hormone receptors, is neat because it breaks down these sorts of artificial barriers spectacularly. Here's the abstract:

The genetic and biophysical mechanisms by which new protein functions evolve is a central question in evolutionary biology, biochemistry, and biophysics. Of particular interest is whether major shifts in protein function are caused by a few mutations of large effect and, if they are, the mechanisms that mediate these changes. Here we combine ancestral protein reconstruction with genetic manipulation and explicit studies of protein structure and dynamics to dissect an ancient and discrete shift in ligand specificity in the steroid receptors, a family of biologically essential hormone-controlled transcription factors. We previously found that the ancestor of the entire steroid receptor family was highly specific for estrogens, but its immediate phylogenetic descendant was sensitive only to androgens, progestogens, and corticosteroids. Here we show that this shift in function was driven primarily by two historical amino acid changes, which caused a ∼70,000-fold change in the ancestral protein’s specificity. These replacements subtly changed the chemistry of two amino acids, but they dramatically reduced estrogen sensitivity by introducing an excess of interaction partners into the receptor/estrogen complex, inducing a frustrated ensemble of suboptimal hydrogen bond networks unique to estrogens. This work shows how the protein’s architecture and dynamics shaped its evolution, amplifying a few biochemically subtle mutations into major shifts in the energetics and function of the protein. 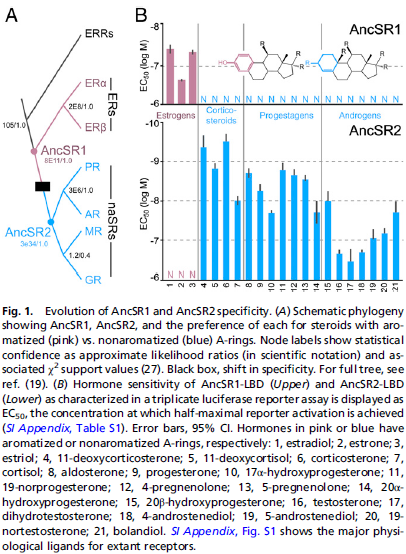 The paper spans several fields, and I can't comment too much about the biophysics, though it is broadly comprehensible (a long time ago I studied biochemistry, so I have a reasonable background in chemistry). In short you have two lineages of these receptors which are implicated in modulating the expression of specific genes associated with particular hormones. This is normally the domain of molecular genetics and biochemistry, as you focus on proximate biomolecular pathways in a series of cascades, which often operate through regulation of genes in specific tissues and at specific times. The interesting aspect of this paper is that they baked into interpretation and analysis evolutionary and phylogenetic insights, which serve as a framing background for the biophysics. In short it looks as if the two different lineages of receptors are differentiated by very subtle, but functionally highly significant, changes. To test the implications of the evolutionary reconstruction they used both simulations and experimental methods. The major take away is that what seems like a minor change which results in minimal changes to the amino acid sequence and little visible structural shifts in the steroid nevertheless perturbs the affinities of the proteins radically. This is not theoretically implausible, but, it is excellent to actually examine the phenomenon from all directions as they have here. The evolutionary aspect of the paper is just the skeleton, the real flesh is illustrating biophysically how the substitutions resulted in energetic alternations and shifts in the nature of molecular interactions. Too often when we think of evolutionary process we focus on coarse morphology which is human scale comprehensible. But one could argue that such radical biochemical changes in organisms, over two orders of magnitude, are themselves macroevolutionary changes. An implication of this result may be that evolution mediated by genetic changes is far more slippery a phenomenon than we may have imagined. Changes in morphology are relatively amenable to our intuition in terms of the fitness implications (e.g., changes in size and shape suited to climates or relevant for intra-specific competition). Not only are they human scaled, but they are often preserved by fossilization, and so are accessible for paleontology. In contrast evolutionary shifts on the molecular scale leave only telltale markers in the genome which we have to infer. The complexity of protein-protein interactions are such that robust analytical models are hard to come by (at least last I checked). If a major focus of evolutionary biology in the future is going to be on large effect mutations altering macromolecular function, then we may be flying somewhat blind for a while. But that’s alright, science proceeds by admissions of ignorance before the long crawl back up the hill. Citation: Harms, Michael J., et al. “Biophysical mechanisms for large-effect mutations in the evolution of steroid hormone receptors.” Proceedings of the National Academy of Sciences (2013).