Mindfulness in the Military 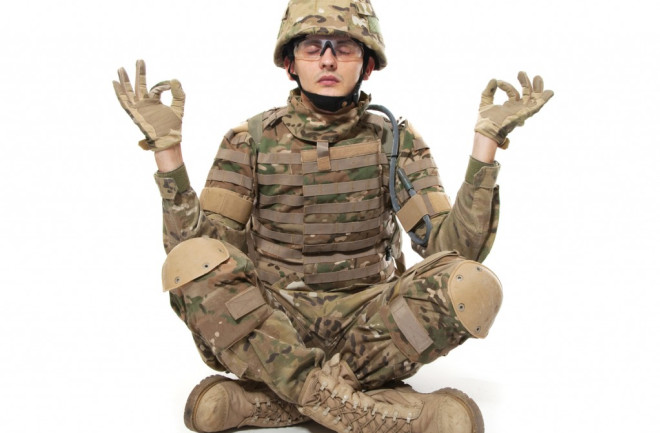 (Credit: S-F/Shutterstock) Sprinkling "Omm" mantras between "Ooh Rah!" battle cries can pay dividends for members of the Marine Corps and other branches of the military. According to a growing body of research, regular meditation improves the wellbeing of military members — both active duty and those who have previously served. Meditation is rooted in spirituality, which affects personal wellness in its own way, but the neurological underpinnings of meditation’s other health benefits are being widely assessed by researchers, and they’re building a scientific case for its benefits.

Commander Jeffrey Millegan, MD, who currently heads the Mind Body Medicine program (MBM) at the Naval Medical Center San Diego, studies meditation's effect on military personnel. His publications, to name a few, include a case report on the ways regular meditation increased the quality of life of a Marine with chronic pain and a preliminary study on using it as a stress-management tool to help cancer patients. Recently, scientists at the Wake Forest Baptist Medical Center thermally heated a patch of skin in groups of participants receiving either mindfulness training or a placebo anesthetic cream and measured their response using pain ratings and magnetic resonance imaging (MRI). The brain scans of meditators showed unique pain-reduction effects; brain regions that help control pain were activated, specifically the orbitofrontal and anterior cingulate cortex, while regions that dissipate pain signals were deactivated. According to Millegan, pain services are in high demand at NMCSD, and pain management is one area where meditation can help. Mindfulness meditation, in short, trains the mind to focus on the present. Millegan offers a pain management course that teaches multiple meditative techniques which can be practiced anywhere, free-of-charge. “The cost of the military health system has continued to grow at an alarming rate,” Millegan wrote in his original proposal for MBM, “it is a priority of the military health system to recapture care from the network through a strategy of improving patient’s customer experience.”

In October, researchers estimated that integrative programs like Millegan’s MBM could reduce healthcare costs by 43 percent. In a retrospective observational study, scientists from multiple institutes, including the Benson-Henry Institute, found that participants in the MBM program had 41 percent fewer clinical visits, 50 percent less imaging, 43 percent fewer laboratory visits, and 20 percent fewer procedures. ER visits were also reduced by more than half. “We envision a program seamlessly integrated with the various medical disciplines maximizing treatment responses for chronic, difficult-to-treat conditions and providing greater resilience to various beneficiaries from new mothers to the war wounded to our own staff,” wrote Millegan. Specifically, difficult conditions include post-traumatic stress disorder (PTSD) and depression, which operational forces frequently suffer and rarely recover from. Millegan says regular meditation can help people develop better sleep hygiene, nurture social connections, and improve communication skills. “Most of the authors and I are regular meditators,” Millegan said when asked if anyone on his team practiced meditation. “It has been profoundly beneficial for me in managing stress, getting regular sleep, and maintaining healthy relationships.” As for soldiers who can’t make it to class, Millegan recommends guided meditation through MP3 players. “It’s a powerful way to help patients gain an introduction to meditation practice given the proliferation of smartphones and other devices,” says Millegan. Studying the effects of tablet-aided meditation on patients through a clinical trial is next on his agenda.

According to a RAND Corporation analysis, more than 18 percent of soldiers returning from Iraq received a diagnosis of post-traumatic stress disorder (PTSD) or depression at a VA health care center. Traumatic brain injury (TBI) is just as common. Veterans may experience symptoms of chronic memory disturbance, persistent avoidance of things associated with a traumatic event, hyperarousal and negative emotions. If left untreated, they can face other psychological conditions that affect daily life as well. “The VA recommends medications (selective serotonin-reuptake inhibitors and prazosin) and psychotherapeutic approaches like cognitive processing therapy, exposure therapy, stress management skills training, and eye desensitization reprocessing for PTSD,” according to researchers at VA Puget Sound. The problem is, they add, “despite the availability of [traditional intervention], many people with PTSD continue to experience PTSD symptoms.” In 2011 researchers at UC San Diego School of Medicine and Naval Health Research Center conducted a test to see if meditation helped soldiers recover from stress more efficiently. Participating Marine units had to complete operational challenges while exposed to close-quarters combat situations created by role players. Half of them received mindfulness training for 20 hours over an 8-week period, including classroom instructions, interviews, and workshops. The researchers periodically assessed their heart and breathing rate, blood samples, self-reports, and for a portion of them, fMRI (functional neuroimaging). Brain scans showed that meditation activated the insular cortex, which helps regulate stress, emotions and homeostasis. According to the paper, those who meditated demonstrated “a more potent response to stress followed by quicker recovery” compared to those who didn’t. “Incorporating meditative practice might be a way to help the U.S. military reduce rising rates of stress-related health conditions,” the researchers concluded.

Increasing the Quality of Life

Carolyn McManus has been teaching mindfulness and loving kindness meditation at VA Puget Sound and the Swedish Cancer Institute in Seattle for over a decade. In loving kindness, “you picture yourself sending thoughts of positive intention to yourself, your loved ones, strangers, and even those who may have done harm,” says McManus. “You forgive and wish others well." In 2013, her team invited 42 veterans to participate in a 12-week loving kindness program and studied its effects through multiple questionnaires. They reported a significant decrease in depression and stress and an increase in self-compassion and mindfulness, when compared to baseline measurements. In a follow-up study, meditating veterans also reported higher levels of pleasant emotions and self-acceptance, indicating an increase in their quality of life. McManus says most of the time patients spend a lot of energy simply trying to accept their diagnosis or a present situation. “A regular meditation practice helps develop inner confidence, calm, and ease,” says McManus. “It can help you respond to life’s challenges with greater skill, insight, wisdom, and love."