An infection can make you have a car crash or determine the sex of your child. 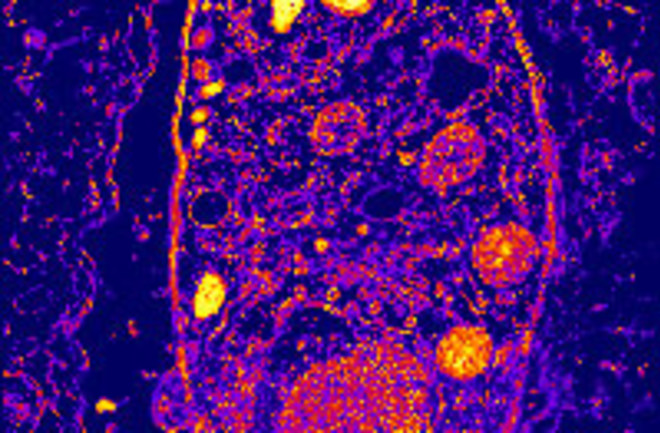 Toxoplasma gondii, revealed here in a colorized electron micrograph, may exert a spooky influence on the people it infects.

Five years ago, Oxford University zoologists showed that the parasite Toxoplasma gondii alters the brain chemistry of rats so that they are more likely to seek out cats. Infection thus makes a rat more likely to be killed and the parasite more likely to end up in a cat—the only host in which it can complete the reproductive step of its life cycle. The parasite also lives in the brain cells of thousands of species, including about 60 million supposedly symptom-free Americans. Studies over the past few years have suggested that toxoplasmosis infections in humans, too, may cause behavioral changes—from subtle shifts to outright schizophrenia. Two studies this year add even weirder twists.

U.S. Geological Survey biologist Kevin Lafferty has linked high rates of toxoplasmosis infection in 39 countries with elevated incidences of neuroticism, suggesting the mind-altering organism may be affecting the cultures of nations.

Stranger still, parasitologist Jaroslav Flegr of Charles University in Prague thinks T. gondii could also be skewing our sex ratios. When he looked at the clinical records of more than 1,800 babies born from 1996 to 2004, he noted a distinct trend: The normal sex ratio is 104 boys born for every 100 girls, but in women with high levels of antibodies against the parasite, the ratio was 260 boys for every 100 girls. Exactly how the parasite might be tipping the odds in favor of males isn't understood, but Flegr points out that it is known to suppress the immune system of its hosts, and because the maternal immune system sometimes attacks male fetuses in very early pregnancy, the parasite's ability to inhibit the immune response might protect future boys as well as itself.

"Our present study was rejected by eight journals, usually without any formal review," says Flegr, who had the same problem publishing an earlier one showing that infection more than doubles the odds of a person having a traffic accident. "People don't like the possibility that their behavior and life are manipulated by a parasite," he says.