Researchers can now study how bacteria interact by keeping them in tiny cages. 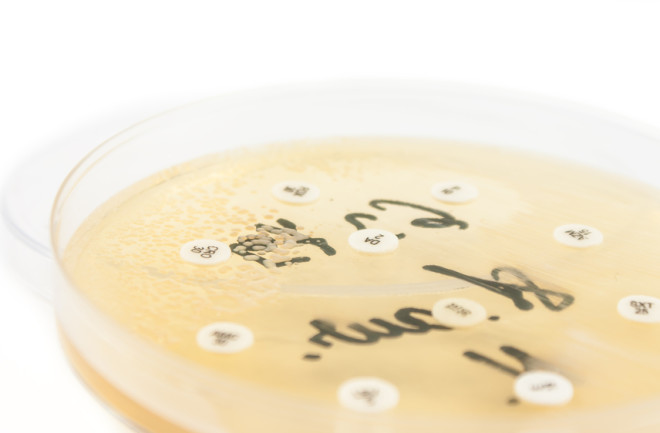 When two or more types of bacteria meet in the wilds of the human body, they can act unpredictably, abandoning their typical responses to antibiotics. Researchers at the University of Texas at Austin recently observed that bacterial species can “collude” with one another to make treatment with antibiotics more difficult.

Staphylococcus aureus and Pseudomonas aeruginosa commonly co-infect wounds, catheters and lungs of cystic fibrosis patients. Staph is usually harmless, but when it’s in the presence of Pseudomonas … well, things can get more serious.

To understand the bacterial intrigue better, the team needed a way to study the two bacteria together. Bioengineer Jason Shear trapped colonies of each in separate puddles of a cooling (and solidifying) protein liquid. The proteins were photoreactive, bonding together in response to laser light. This allowed Shear to trace ultrathin, mostly transparent walls out of the liquid, and to join them into cages, trapping the separate colonies.

Shear nested a cage of Staph inside a cage of Pseudomonas, allowing the two colonies to live in close, controlled quarters. The walls of the gelatin cages allowed food and waste to wash back and forth between populations. After only a few hours surrounded by Pseudomonas, Staph became antibiotic-resistant. Shear thinks it’s a result of a particular enzyme, beta-lactamase, naturally produced by the Pseudomonas also making its way into the Staph cage.

The work may prompt hospitals to be better prepared for anticipating and reacting to changes in bacterial infections when more than one population is present. Next on the team’s schedule is looking at how other bacterial chemicals and molecules — even something as simple as oxygen — will change bacterial behavior when in close proximity to another population.