May the Vaccines Be With You!

What is the best way to persuade parents to get their kids vaccinated against preventable diseases? Tug sentimentally at the heartstrings? Appeal to common sense and logic? Shame and blame?

Or how about going the pop culture route and using characters from one of the most popular movies in history as the CDC and the Department of Health, Education, & Welfare did in April 1978? 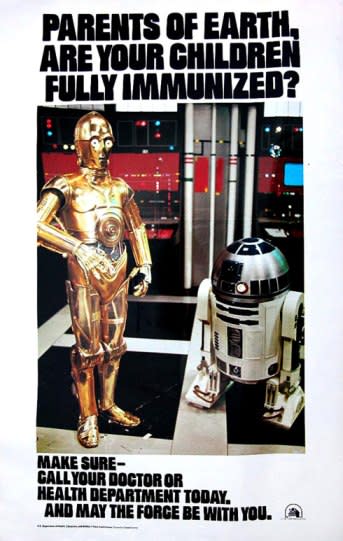 The poster for the clever Star Wars Public Service Announcement featuring C-3PO and R2-D2 from the CDC and the Department of Health, Education, and Welfare encouraging parents to vaccinate their children against preventable infections.

The poster on the right and the short commercial below feature the characters C-3PO and R2-D2 speaking directly to the "parents of Earth" on the necessity of vaccinating their children fully against polio, measles and whooping cough and the dangers of not doing so. As C-3PO admonishes a coughing R2-DC, "Droids don't get diseases like whooping cough, or measles, or polio. But children do. All you need is a little rewiring but children need to be fully immunized but, alas, so many are not."

I think it's a particularly inspired moment in public health propaganda. If you're going to convince wary parents to get their children vaccinated, why not use the Force?

See more public health posters from the National Library of Medicine's exhibition, "To Your Health: An Exhibition of Posters for Contemporary Public Health Issues

." Washington state is the midst of a whooping cough epidemic - there were 4,815 cases of the disease last year - and certain types of vaccines may be to blame for a drop in efficiency and protection over time. Maryn McKenna goes into greater detail here

. The White House just quashed a petition for the country to "secure resources and funding, and begin construction of a Death Star by 2016." Paul Shawcross, the Chief of the Science and Space Branch at the White House Office of Management and Budget, has a very inspiring and feel-good letter

about why the Death Star will not be built but that the USA is on the right track for space exploration irregardless. References Wookieepdia: The Star Wars Wiki. (Unknown date of publishing) "Star Wars Immunization PSA." Accessed January 15, 2013 here