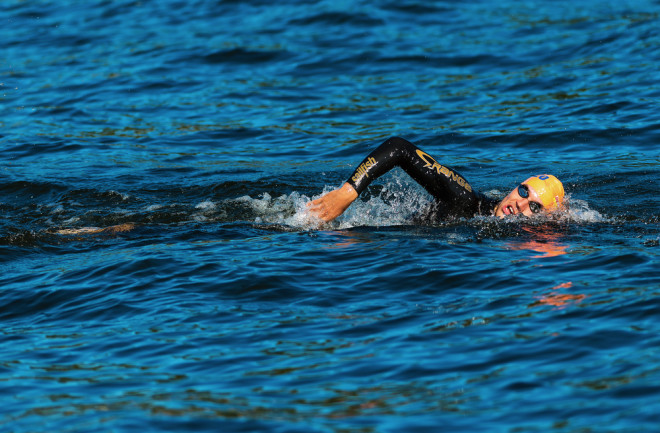 Those polar plunge nuts—you know, the people who strip to their skivvies in February and jump into freezing water—might be on to something.

According to doctors from the United Kingdom, a 28-year-old man who had been complaining of persistent, post-operative pain was cured after jumping into incredibly cold water for a vigorous 60-second, intense swim. Roughly two months prior to his swim, the man had undergone an endoscopic thoracic sympathectomy procedure to treat his severe facial blushing. In this procedure, a portion of the sympathetic nerve trunk is destroyed to treat excessive sweating, blushing and Raynaud’s disease.

The operation went smoothly, but nagging, sharp pain in his chest continued for 10 weeks after the operation. Exercise and movement tended to make things worse, which was bad news for the patient, who has a devoted triathlete. Doctors tried analgesics and other means to control pain with limited success, and when things didn’t work, the patient took a leap of faith.

In a bold attempt to take his mind of pain, the patient decided to go for a swim in the coastal waters of a past triathlon competition. His route was along a rocky, jagged coastline; therefore, there was no dipping his toes in to acclimate to the water. The man had to jump from a rocky outcrop.

“I wasn’t sure if it would help the pain—I just wanted to do it—I thought at best it was a long-shot, but I was desperate to get some relief,” the man told doctors.

When his body slapped into seawater that was 52 degrees Fahrenheit, he had no choice but to swim for safety, or risk hypothermia. He told doctors:

“I initially thought, ‘Damn this is so cold I’m going to die!’ I just swam for my life. Once I was in the water, I had tunnel vision. For the first time in months, I completely forgot about the pain or the fear of shooting pains in my chest if I moved. My entire body tingled with the cold. I just knew if I didn’t keep swimming, I’d soon freeze. After a few moments I actually enjoyed it – it was just an immersive rush of adrenaline. I bet I couldn’t have felt my pain, even if I tried.”

The funny thing is, his pain never returned.

Doctors, of course, dug into the man’s case to see if there was any precedent, but they couldn’t find any in their survey of medical literature. No doubt, ice baths and pool therapy are commonplace in rehabilitation regimens, but swimming in bitter cold water to manage pain appears to be a new one.

The authors considered that this could just be a coincidence, and that there isn’t enough evidence to build a causal relationship between swimming, cold water and pain relief. Maybe it was the placebo effect. Maybe the shock of the water overwhelmed his persistent pain. But if that’s the case, why did the pain remain in remission long after the initial shock of jumping in the water passed? The doctors say they don’t have a clear explanation for why this man’s unorthodox therapy session worked. In a report published Monday in the British Medical Journal, doctors wrote:

“It is possible that the high range of movement involved in swimming manipulated tissues surrounding peripheral nerves in such a way as to mechanically free adhesions and resolve pain. Psychologically, ‘flooding’ with intense activity may have abruptly broken maladaptive cycles of movement avoidance and withdrawal from exercise and its associated pain relieving properties.”

This case, though it may be an outlier, challenges conventional thinking about postoperative treatment and pain management. The doctors say the takeaway here is that more physically aggressive rehabilitation programs may be warranted for certain patients; of course, not everyone can or should jump into bone-chilling water to alleviate postoperative pain. Of course, they’d like to conduct more research into the analgesic effects of forced, cold-water swimming.