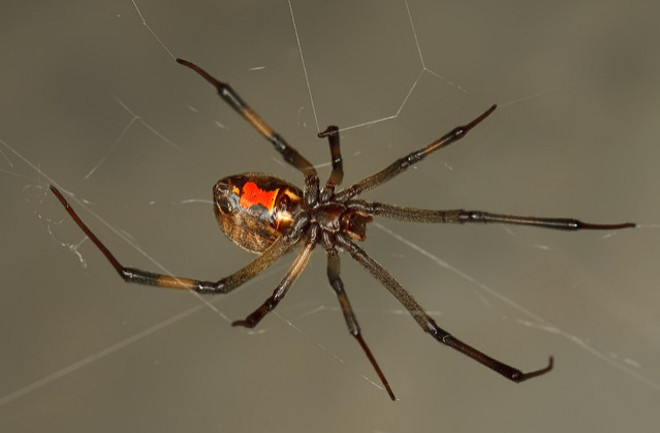 We've featured a number of articles about the sexual proclivities of spiders: from oral sex to genital mutilation, arachnids have a wide-ranging sex life. Here's another example -- female brown widow spiders often eat their male partners after mating. That's pretty wild, and it gets even more intense: these scientists found that male spiders prefer to mate with older females, even though these females are less fertile and more likely to eat the men after the deed is done. The authors are unable to find an evolutionary explanation for this counterintuitive behavior, so they "suggest that older females produce more pheromone to attract males and that males are thus misled into mating with older, more aggressive and less fecund females." Perhaps they've found the cannibal spider version of human "cougars"?

Male mate choice in a sexually cannibalistic widow spider "Males of the brown widow spider, Latrodectus geometricus (Theridiidae), invest energy in courtship displays and are often cannibalized after mating; accordingly, partial sex role reversal is expected. In this species, subadult females are able to mate and produce viable offspring. In contrast to mature females, these subadult females do not cannibalize their mates after copulation. Nevertheless, when given a choice, males preferred mature over subadult females and older over young mature females. We found no benefit for males in mating with the females of their choice. Older females were significantly less fecund than young mature females, and were not more fecund than subadult females. We tested possible advantages in mating with cannibalistic (mature) females, such as an increased probability of plugging the female's genital duct or longer copulations, or disadvantages in mating with subadult females, such as higher remating risk. None of these explanations was supported. Thus, we lack an adaptive explanation for male preference for mature older females. We suggest that older females produce more pheromone to attract males and that males are thus misled into mating with older, more aggressive and less fecund females." Related content: Male spiders play dead to avoid “sexual cannibalism.”Spider sex is kinkier than you thought!Spiders perform female genital mutilation to ensure faithfulness.