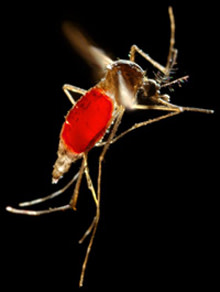 A mosquito's whiny buzz may be one of the most annoying noises to human ears, but for some mosquitoes it's an intricate love song. A new study of the mosquito Aedes aegypti, which carries the infectious diseases dengue fever and yellow fever, has shown that when males and females mate they adjust the speed of their beating wings until their two buzzes combine to produce a harmonious tone. And this isn't just gee-whiz science: Researchers say the finding could help in the fight against the disease-carrying insects.

The male mosquito's buzz, or flight tone, is normally about 600 cycles per second, or 600-Hz. The female's tone is about 400-Hz. In music, he's roughly a D, and she's about a G. So the male brings his tone into phase with the female's to create a near-perfect duet. Together, the two tones create what musicians call an overtone — a third, fainter tone at 1200-Hz. Only then will the mosquitoes mate [NPR].

Researchers were surprised that the mosquitoes could detect the overtone, because they previously believed that A. aegypi males couldn't hear frequencies above 800-Hz, and the females were thought to be completely deaf. In the study, published in Science [subscription required], researchers note that some recent attempts to reduce A. aegypi populations have focused on genetically engineering male mosquitoes to make them sterile, and then releasing those males into the wild to mate, fruitlessly, with females. The new knowledge of what a female A. aegypi looks for in a mate could allow researchers to test the males before they're released to see if they can produce a properly harmonic buzz. Says study coauthor Ronald Hoy:

"We don't want to be releasing duds out there, we want to release sterile studs" [AP].

She hopes in future to breed transgenic males that are "better singers". These mellifluous males would be nigh-on-irresistible to females, who would mate with them "even though it's not in their best interests". The partnership would yield offspring which are either inviable, or unable to transmit dengue virus. "If we can interrupt mating and reproduction, we have a very strong tool for mosquito control," says Professor Harrington [BBC News].