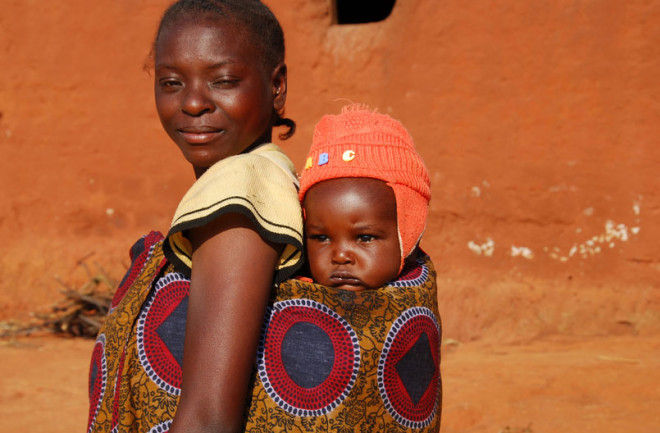 A mother and baby from the village of Pomerini, Tanzania. It's estimated that the disease kills 60,000 to 80,000 people there annually. (Credit: Franco Valpato/Shutterstock) You have a bit of your mother in you, literally. When scientists performed biopsies of young adults’ organs, they’ve found maternal cells embedded in hearts, kidneys, and liver. This phenomenon, called microchimerism, is caused by a small number of cells passing through the placenta during pregnancy. The transfer goes both ways, and scientists think it’s like a meet-and-greet between mom and fetus, preventing their immune systems from treating each other’s cells as dangerous invaders. But that doesn’t explain why these cells stick around long after birth.

A new study published recently in the Journal of Infectious Diseases suggests that the mother’s immune cells may play an active role protecting their children over the first few years of life. In Tanzania, where malaria is endemic, babies born to women infected with the disease during pregnancy were observed to have 200 to 2,000-fold more maternal DNA in their blood than babies of uninfected mothers. More importantly, as confirmed by regular medical examinations over the next four years, these children were less likely to become sick or hospitalized due to the disease. Malaria is caused by a parasite that invades red blood cells and is ferried from person to person via mosquitoes. Recent vaccines and new treatments have decreased infection and mortality rates from the disease, but according to the World Health Organization, a child under the age of five still dies of malaria on average once every two minutes. In 2002, the National Institutes of Health began the Mother-Offspring Malaria Studies (MOMS) project in Tanzania to understand malaria’s impact on pregnant women and young children in a community where the disease is rampant. The study collected placentas and cord blood samples of newborns and conducted regular follow-up screenings to identify infection and sickness for the first four years of life. Children born to mothers infected with malaria during pregnancy seemed less likely to show up at the checkups with symptoms of the disease, the study found. “Other scientists have had similar findings,” says Patrick Duffy, the study’s director. “We’re trying to understand the mechanism.” Duffy, who runs the NIH’s Division of Intramural Research malaria vaccine program and is an author on the Journal of Infectious Diseases paper, said that there is debate as to whether exposure to the pathogen in the womb primes the baby’s own immune system or if it’s something from the mother that is giving the child a leg up.

First author Whitney Harrington, who worked with MOMS data for her PhD, wanted to see if that “something” could be maternal microchimerism. The authors obtained placenta and cord blood samples from 53 of the study’s participants and separated those whose mothers had malaria during pregnancy by analysis of the placenta alone. “It’s striking,” said Harrington, now pediatric disease fellow at Fred Hutchinson Cancer Research Center, “the maternal side of the placenta is clogged with infected red blood cells and inflammatory cells.” For each cord blood sample, the researchers identified cell markers unique to the mother. While they couldn’t pick out individual cells from the blood, they could screen the total DNA present. In babies with uninfected mothers, they found roughly four copies of the mother’s DNA for every 100,000 copies of the baby’s DNA, which was in line with other maternal microchimerism studies. But in babies where the mother’s placenta was infected, the maternal DNA ratio was significantly higher, on average about 800 copies per 100,000, and for severe infections, it would climb to just over 2,000 copies per 100,000. Red blood cells don’t contain DNA, so this DNA likely comes from white blood cells. To put it a different way, in these babies, close to 1 percent of all the circulating immune cells are their mother’s. Researchers found another association when they studied the results from medical screens. Children whose mothers were infected had higher rates of infection with the malaria parasite but were less likely to become sick or hospitalized. This may seem counterintuitive, but it’s the immune system’s response to the malaria parasite that leads to the inflammation, pain, fever and fatigue. “We think that the maternal cells are saying to the baby, 'Don’t react that much,'” said Harrington. This tolerance means the child is more susceptible to infection but less likely to get sick.

Harrington doesn’t know yet if the mother’s immune cells are taking an active role in the malaria response, or if they’re indirectly educating the baby’s immune system; it’s something she’s planning to investigate as part of two similar studies planned in Mali and Uganda. But either mechanism demonstrates a long-term immunological role for microchimerism in mammals. And in humans, malaria may have played a role in this adaptation. “Malaria is probably the largest force in human evolution,” said Harrington. To counter the parasite’s virulence, our genomes have retained adaptations that lead to sickle cell anemia, thalassemia and other red blood cells diseases that, taken together, make up humankind’s most common Mendelian diseases. Despite the small sample size, the work is significant and [its findings] proactive, said Sing Sing Way, an infectious diseases pediatrician at Cincinnati Children’s Hospital who was not involved in the study. Way, who studies microchimerism in animal models, said he hopes these results will drive new research “for people like me, who test things in animal models, to formulate hypotheses and figure out where this biology is coming from.” Duffy thinks the microchimerism study could be used to develop risk markers to help identify children more susceptible to severe malaria. In those cases, closer monitoring and more frequent regular checkups could keep such kids healthier. This would lead to a departure from current medical practices, in which malaria treatments are of the one-size-fits-all variety. “We need a deeper understanding of who’s really at risk for the worst outcomes,” said Duffy.