A few weeks ago I purchased what I have since referred to as a "coffee table book for nerds," Martin Novak'sEvolutionary Dynamics: Exploring the Equations of Life, a richly illustrated hardcover which is eminently browsable. In keeping with the focus of Nowak's own researches the chapters in this work are heavy on game theory, and light on population & quantitative genetics. This is fine by me, I'm interested in boning up on game theory beyond hawk & dove ESSes. But there is some evolutionary genetic material, though offering his more cutting edge spin. In the second chapter there is a thorough look into adaptive landscapes assuming a hyperdimensional genomic space. The original adaptive landscapes were rather primitive affairs, conceived of by Sewall Wright (somewhat cloudily) as two loci diallelic dimensions in concert with one of fitness. Their aim was to illustrate Wright's ideas about the importance of meta-population dynamics and genetic interactions (i.e., epistasis) in maintaining a diverse adaptive landscape with multiple fitness peaks. This was in contradiction to R.A. Fisher's emphasis on one primary global peak which natural selection slowly ascended through action upon additive & independent genetic elements. Over the past 70 years adaptive landscapes have had more utility as illustrative heuristics than analytic tools which offer precise predictions which one might test. A few researchers have pushed the area of adaptive landscapes further with new mathematical techniques, see Sergey Gavrilets recent work for instance. But in any case I think adaptive landscapes are still more useful as analogies or heuristics which add a crisp precision to more conventional verbal descriptions than rigorous models which can offer up a clear experimental research program. Nowak's chapter nevertheless is notable for highlighting the usage of this model in clarifying some issues First, I must stipulate a great deal of Evolutionary Dynamics consists of derivations of equations from first principles. This isn't the stuff of breezy reading, but seeing the subtitle it shouldn't be surprising. Nevertheless, there is a great deal of biological insight and logic that these equations drive home, and fundamentally one can extract value by simply focusing on the central formulae and the summaries near the end of each chapter.^1 Nowak begins by modeling the genome as hypercube of n-dimensions, where n is defined by the length of the genome. The underlying rationale for this is simple: the genome is a string of information where each position (read: dimension) is represented by one of four bases (value within that dimension). By conceptualizing the genome as a hypercube which explores a multi-dimensional space we can move our image of adaptive landscapes beyond a few loci. The hypercube is the real adaptive space that a variable genome explores and in which selection operates. A common refrain in the mid-20th century was that a particular school of geneticists (specifically, R.A. Fisher and J.B.S. Haldane and their acolytes) were "bean baggers" who cavalierly elided the complexity of genetic systems by taking the assumption of an average "genetic background" too far and analyzing variant alleles on a few loci as if they existed in their own islands of experience. Whatever the merits of this skepticism (expressed most famously by the evolutionary biologist Ernst Mayr) the solution and response is pushing the analytic and modeling rigor further, not abandoning the endeavour altogether. As in convential adaptive landscapes the genome exploring the hypercube attempts to maximize fitness. Adding mutation into the model is I believe a very interesting and important consideration, and through this Nowak shows that idealized global peaks are not necessarily the peaks which the population will stabilize at when mutation-selection balance (equilibrium) is attained. The trivial example is a population which begins at the global peak in generation 1 but mutation drives it off that peak. Obviously the balance will be attained at some remove away from the initial point (the global peak), to be determined by dispersive power of mutation (which moves it away from the peak in a random walk manner) and selection (which drags it back toward the peak). Nowak eventually uses the dynamic of mutation to introduce the idea of an "error threshold." Roughly, this is the dispersive tendency of the population away from the initial condition which results in the exploration of the adaptive landscape. If there is no mutation (error threshold) then the population does not explore the adaptive landscape and "feel" the local fitness maxima. This makes intuitive sense from what we know in classical evolutionary genetics:

. Of course, if the error threshold is too high then adaptation can not occur as the population has a distribution which does not appropriately "feel" the fitness landscapes and is delocalized. These finding should be familiar, as it reaffirms R.A. Fisher's insights regarding adaptation, which also utilized a geometric analogy. Roughly, large mutations have a tendency to scatter the population away from the fitness optima more powerfully than selection can drag them back. Nowak shows that overall the mutation rate must be less than 1 per genome for adaptation to occur (the populations can "feel" the fitness optima). He offers that experimentally this has been born out. 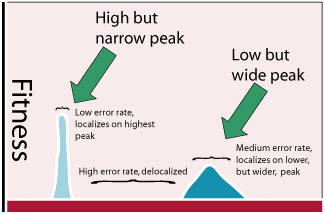 But for me the most interesting conclusion which Nowak comes to is that the rate of mutation & the nature of fitness optima may impact which peak a population stabilizes upon. The figure to the left illustrates the general concept. If the error threshold (mutation rate) is high then populations will tend to "slide off" the fitness peak. If that peak was the sole one within the adaptive landscape then the population would become delocalized as selection would not be able to attain and equilibrium with mutation (the delocalized genomic states can then be addressed by Neutral Theory presumably). But there are going to be many situations (all?) where the highest peak may not be the only one, and, if another peak is "broader" than the highest peak it might be a possible secondary optimum which the population can stabilize upon. Of course, if the error threshold is too high then the population can still be delocalized. Remember when I said that the adaptive landscape had illustrative value? Consider what a high but "narrow" peak might be: a highly contingent, but superior, phenotype which is very sensitive to mutational rate (i.e., de novo mutations easily disrupt it). In contrast, a "broad" peak might be one which is less fit (both physiologically and reproductively at maturity) but subject to more developmental buffering and exhibits less contingency (ergo, it is less dependent on every locus having a specific and precise state and so can tolerate a greater mutational rate). Intuitively this makes sense, and we already knew it, but I believe the model of the hyperdimensional adaptive landscape adds a crisp clarity which is helpful. Of course, I also believe that the day will come when these models will go beyond broad heuristics and start to shape our conception of evolutionary dynamics on a fine grained level. 1 - Calculus, differential equations and linear algebra are pretty necessary to follow many of the derivations. Do you know what an identity matrix is? You better.