Like to Exercise? Let’s Hope You Don’t Have Prostate Cancer. 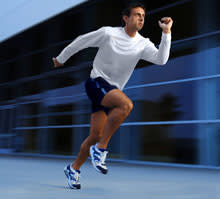 Researchers at the Duke Comprehensive Cancer Center have completed a new study finding that mice who exercised saw "significantly greater" growth in their prostate tumors than mice who sat on their butts and did nothing. The research team implanted prostate tumors in 50 mice and placed half of them in cages with exercise wheels, while the other half had no wheels. All of the mice were fed the same diet, and those with wheels ran a half a mile a day, on average. According to Lee Jones, the study's senior investigator, "among the mice that had the opportunity to voluntarily exercise, tumors grew approximately twice as fast as they did among the mice that did not have the opportunity to exercise.” The reason for the discrepancy, experts speculate, is that exercise could increase blood flow to tumors and thus encourage their growth. The upside: The researchers are now exploring ways to use the increased blood circulation caused by exercise to better distribute treatments like chemotherapy, hormone therapy, and radiation, and maximize their effectiveness. The downside: All that treadmill time may just backfire by sending blood straight to those tumors. Happy running!