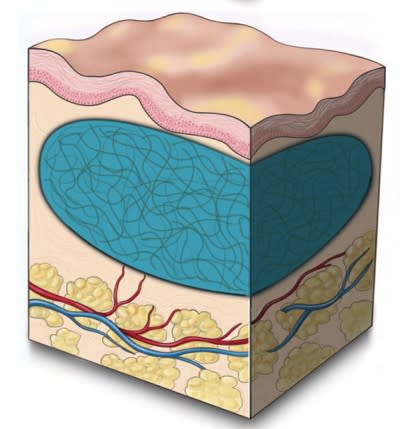 Before LED light is shined on it, the injected gel is still fluid and can fill up any gaps of spaces under the skin.

What's the News: Scientists have developed a gel that could be used to rebuild the faces of crash victims

. Activated by light, it solves several of the problems inherent in the usual methods. What's the Context:

The Future Holds: Future research will investigate more specifically how the gel will work in humans---the researchers noticed more inflammation than they expected in their volunteers, so sussing out how it interacts with the human immune system is next on the agenda. Reference: Hillel et al. Photoactivated Composite Biomaterial for Soft Tissue Restoration in Rodents and in Humans. Sci Transl Med 27 July 2011: Vol. 3, Issue 93, p. 93ra67 DOI: 10.1126/scitranslmed.3002331