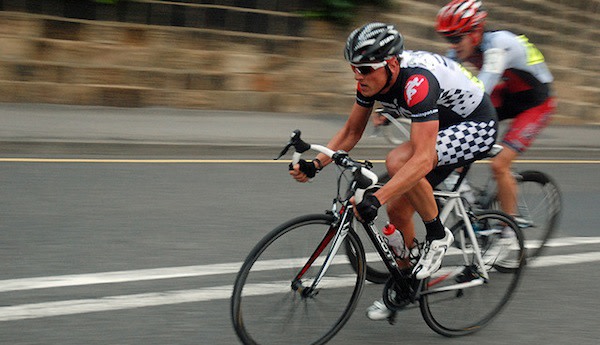 Floyd Landis wants to legalize doping in professional cycling. His argument is a reasonable one. Landis argues that, since everyone is doing it already and the tests will never keep up, might as well just legalize and regulate it instead of banning it entirely. Other cyclists and the governing bodies of competitive cycling have all but called Landis a complete nutter. Charges of doping brought against other cyclists, particularly Lance Armstrong, are met with refutations of "innocent until proven guilty." While I agree that doping should be allowed for cyclists, I disagree with the reason Landis gives:

You got to go about it another way and you've got to legalise doping. They [the testers] are so far behind in the testing organisations that there's no way to change it now. Just accept that it's here, that it's not going away and that it's just going to get more complicated and the fact that it's not that complicated yet compared to what it will be. Ten years from now it's going to be four times as hard as it now to test for things.

Laws and ethics are not based on what is easy and what is hard to control. They are based on standards of justice and what is ethically right. The reason I believe doping should be allowed is that I see nothing unjust or wrong about professional athletes using chemical compounds and medical knowledge to improve their abilities and performance. Let me rephrase that: there is nothing wrong with taking steroids. The concern over professional athletes misusing steroids is always framed as some lone juicer injecting himself in his bedroom so he can get that extra home run. That's not how it happens. Even illegal doping is under the watchful gaze of a team of professional athletic doctors, trainers and nutritionists. Do you think Floyd Landis mixed up his hyper-complex, nary-undetectible designer steroids and blood doping techniques in a lab in his basement? Or maybe he purchased all of his doping gear from a shady fella who hangs out at the track after midnight? No. Clearly, Landis (and every other competitor, probably) had assistance from highly trained professionals working to ensure he would be stronger, better, faster, with minimal risk to his overall performance and health. Steroids are dangerous. But so are thousands of other prescription drugs for which we require doctor supervision. The only ethical reason to ban steroids if they are dangerous and harmful even when used properly. To say doping is wrong because it's against the rules is circular, yet that's what most arguments come down to once one is unable to prove steroids are harmful if used properly. Let's stop pretending that most professional athletes 1) aren't doping and 2) that they aren't under strict supervision when they do. Let em take 'roids. Image of speedy cyclists via