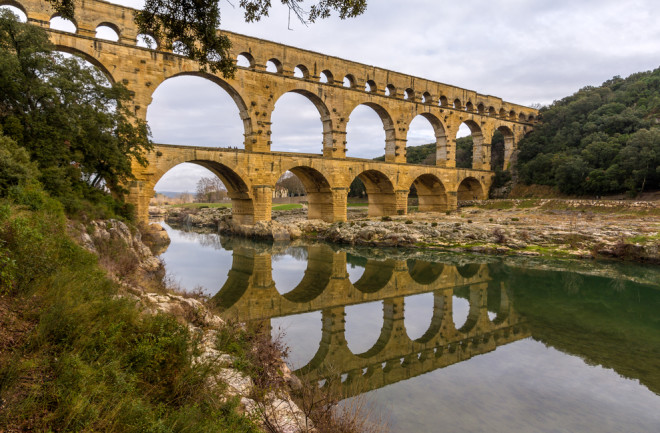 Pont du Gard, an ancient Roman aqueduct in France. Image by Leonid Andronov / Shutterstock. Everything from northern barbarians to the spread of Christianity has been blamed for the collapse of ancient Rome. But researchers have new evidence for another contributor: There was something in the water. A study has found that "tap" water in ancient Rome — supplied to the city via lead pipes called fistulae — contained 100 times more lead than water drawn directly from local springs. That amount of lead in the water may have been a "major public health issue," according to the new study.

Researchers began by taking sediment samples from areas in and around the Tiber River, which has had an important role in Rome's history — the city was founded on its banks more than 2,700 years ag0. Sediment was also sampled from adjacent canals and the man-made Trajanic Harbor, part of Rome's largest seaport and located near the Tiber's mouth. The team chose the locations because the sediment chronology there could be measured through geochemical analysis and compared against historical references to human activity in those exact areas. This allowed the researchers to date the sediment deposited during several key periods, including preharbor ("unpolluted" water), Early and Late Roman empire (water that would have been outflow from Rome's extensive fistulae network) and Early, High and Late Middle Ages (water that would have gradually reverted to preharbor conditions as Rome's population and infrastructure declined).

The researchers found that water in the city during the height of the Roman Empire was dramatically elevated in lead levels. By analyzing the specific composition of the lead isotopes present, researchers were able to determine that the lead came from mines outside Italy — specifically from areas in southwestern Spain, France, England and Germany, where mines that supplied the raw materials for Rome's fistulae were known to have existed. The analysis supports the idea that the lead found in the water came from the supply pipes, rather than another source of contamination. The study was published today in the Proceedings of the National Academy of Sciences. While the research is new, the theory that lead poisoning was a factor in Rome's decline is not. Researchers first proposed the idea decades ago, which sparked a contentious debate. Geochemist Clair Patterson, profiled Sunday on the latest episode of Cosmos, was among the researchers who argued that environmental exposure to lead in ancient Rome and other early civilizations played a role in their downfalls. The theory contributed to a successful campaign to have lead removed from gasoline in the U.S. Despite the significantly elevated levels of lead in Rome's waters during the empire's height, researchers noted that their work does not examine what, if any, health problems were caused.