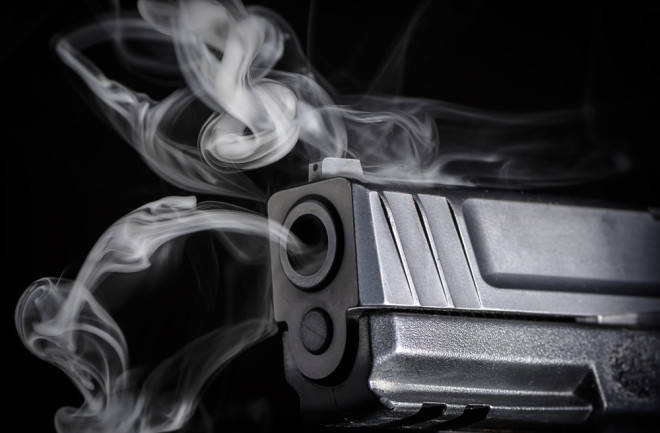 (Credit: DmyTo/Shutterstock) Every year, the National Institutes of Health and the Centers for Disease Control allocate more than $35 billion to researchers to study diseases, treatments and public health. But there's one public health concern that hasn't received funding in nearly two decades: firearm regulations. Firearms accounted for more than 30,000 deaths in 2014 — about the same number as died from motor vehicle accidents. With vanishingly few studies to investigate firearm deaths, however, researchers are unable to recommend the best course of action for public health officials to take. In 1996, Congress passed legislation that specifically prohibited the use of government funds for the promotion of of gun control. Fearing funding cuts, the government agencies that hand out grants to researchers instated a self-imposed ban on any sort of research into firearms. The CDC has funded no studies directly related to firearms, while the NIH has been only slightly less cautious — despite a 2013 memorandum from President Barack Obama instructing both agencies to begin funding research into gun violence. More often than not, researchers rely on their own resources to conduct their work.

"This is the only, literally the only, topic that is excluded from research anywhere," says Eric Fleegler, an associate professor of pediatrics at Harvard Medical School and physician at Boston Children's Hospital. "The consequence of that is that there are very few dedicated firearm researchers in the United States." Fleegler is co-author of a new review study appearing in JAMA Internal Medicine examining the effectiveness of gun control measures, based on studies conducted between 1970 and 2016. The American Medical Association (AMA) had been relatively quiet on firearm issues, but in June passed a resolution calling for stronger firearm legislation and more gun studies following a deadly shooting at an Orlando nightclub that killed 50 people. Fleegler's results mirrored those of previous such studies: the data is messy, but certain kinds of gun control laws are correlated with a decrease in firearm homicides. Looking at 34 studies culled from a list of more than 500, they analyzed the effects of laws designed to curb gun trafficking, strengthen background checks, ban assault weapons, improve child safety and restrict where firearms can be carried. Implementing background checks and requiring a permit to purchase guns were associated with reduced firearm deaths, even after controlling for demographic factors. The data for other measures was either mixed or inconclusive.

Not The Whole Truth

While their findings may agree with previous research, studies like Fleegler's paint an incomplete picture. The dearth of funding, combined with data gathering difficulties means the the body of research is far from adequate. It's not as if the data isn't there, however. The FBI processes all background checks for gun purchases, and the Bureau of Alcohol, Tobacco, Firearms and Explosives (ATF) keeps records of all guns sold by dealers, who must turn over the information when out of business. But the 2003 Tiahrt Amendments prohibited the release of most of this data. The FBI must destroy all information related to approved checks within 24 hours, and the ATF cannot release its data to the public, including researchers. In fact, the ATF was only recently allowed to keep electronic firearms records, but is still prohibited from performing keyword searches on the data, meaning that they must sort through thousands of records one by one.

(Credit: Christopher Slesarchik/Shutterstock) Data on the other end of the barrel is hard to come by as well. While the National Violent Death Reporting System maintained by the CDC includes information on gun deaths, when it comes to non-fatal firearm injuries, the data dries up. "We don't have standardized data on non-fatal gunshot wounds. There simply is no system to record that," says Daniel Webster, the director of the Center for Gun Policy and Research at Johns Hopkins University. While the FBI curates a list of firearm injuries, compliance is completely voluntary, according to Webster, meaning that the datasets for some cities like Chicago contain gaping holes. Most non-fatal crimes committed with a firearm are lumped together under "aggravated assault," which means threatening person with a gun and shooting a person are catalogued in the same way. Fleegler contrasts the state of firearm crime data to the Fatality Analysis Reporting System (FARS) used to report automobile accident data, which includes extremely detailed information about every fatality reported in a car accident. "We need databases that have real data," says Fleegler. "Whenever a firearm injury occurs we should be able to find out really quality data about what happened."

Not the Way It Used To Be

Webster, who has conducted research on firearms for nearly 25 years, says that it wasn't always this way. Before subsequent rounds of legislation cut off access to databases and funding, researchers were finding strong connections between unscrupulous gun dealers and violent crimes. In addition, they were able to observe the impacts of police activities, such as undercover sting operations, and draw clear cause and effect conclusions from their data. "I and many others were making a lot of very important discoveries that were very informative to gun policy," he says. "They didn’t look very good on the gun industry and that is why they got their friends in Congress to place these restrictions on the gun data."

When funding is short, researchers are also unable to do the kind of randomized control trials that are considered the gold standard for research. In their place, they often rely on case control studies that utilize old, generalized data, and pick through it to spot trends. This, too, produces unclear results. For example, researchers have looked at states and cities both before and after enacting firearm legislation. But it takes years to observe any cause-and-effect trends that might emerge. Guns don't disappear when stronger gun laws are passed, and they'll often be purchased elsewhere and brought back to areas with stricter gun laws. The patchwork nature of gun legislation in cities and states across the country also makes comparing two areas difficult, even if demographic and socio-economic factors are controlled for. When such studies are carried out, it is often on the researchers own budget. Except for one co-author, who was supported by the Joyce Foundation, Fleegler and his team cite no specific sources of funding for their research, meaning that it takes place at the expense of other projects. Their 2013 study was published under the same conditions. Webster has also received funding from the Joyce Foundation, but says that the support was never enough to conduct the kind of exhaustive studies needed to address the issue. "There are people in my school who study malaria, who study different infectious diseases and they can produce these proposals in for funding for multimillion dollar studies and that’s never going to happen for me in what I do," says Webster. "There’s simply no government entity or private entity that funds at that level."