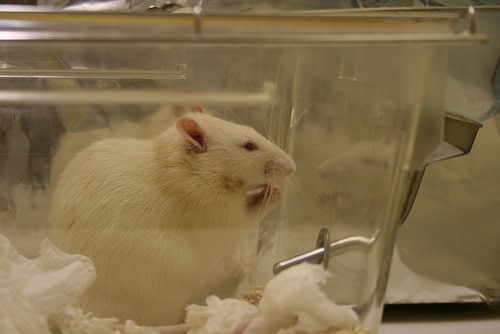 Though the subway rats may have been able to escape

from a flooded animal facility in the basement of the Smilow Research Center in Manhattan, according to The New York Times. These lab animals are genetically engineered and/or specially bred with traits that make them good models for human disorders, like cancer, heart disease, and schizophrenia. Creating such research strains can take years. Gordon Fishell, associate director of the NYU Neuroscience Institute, told the Times

that he lost 10 years of work in the flood. A basement animal facility also flooded at Johns Hopkins University, in Baltimore, but staff members rescued many of the animals, ScienceInsider reported

. Research animals have met watery basement deaths during previous hurricanes, but these precedents have not kept research institutions from housing their animals below ground. In 2001, tropical storm Allison drowned research animals

in the basements of the University of Texas medical school and the Baylor College of Medicine. UT learned its lesson and developed a successful rescue plan, Daniel Engber writes at Slate

, moving their animals from the basement to higher ground during Hurricane Ike, in 2008. In 2005, Hurricane Katrina drowned lab animals at Tulane

and Louisiana State University, many in basements, according to Engber. Yet NYU's Smilow Researcher Center, with its basement animal facilities, was built in 2002, after Allison. Engber suggests that research institutions keep their animals in basements despite the flood risk in part to shield them from public view given the tension about using animals for research. The animals are getting posthumous attention now. Lab rat