There's a new paper, The Peopling of Korea Revealed by Analyses of Mitochondrial DNA and Y-Chromosomal Markers:

Methodology and Results We analyzed mitochondrial DNA...sequence variation in the hypervariable segments I and II...and haplogroup-specific mutations in coding regions in 445 individuals from seven east Asian populations...In addition, published mtDNA haplogroup data...mtDNA HVS-I sequences...Y chromosome haplogroup data...and Y chromosome STR da...were analyzed to elucidate the genetic structure of East Asian populations. All the mtDNA profiles studied here were classified into subsets of haplogroups common in East Asia, with just two exceptions. In general, the Korean mtDNA profiles revealed similarities to other northeastern Asian populations through analysis of individual haplogroup distributions, genetic distances between populations or an analysis of molecular variance, although a minor southern contribution was also suggested. Reanalysis of Y-chromosomal data confirmed both the overall similarity to other northeastern populations, and also a larger paternal contribution from southeastern populations. Conclusion The present work provides evidence that peopling of Korea can be seen as a complex process, interpreted as an early northern Asian settlement with at least one subsequent male-biased southern-to-northern migration, possibly associated with the spread of rice agriculture.

Last month I posted on the genetic map of East Asia. That paper surveyed hundreds of thousands of variant loci in the autosomal genome, and mapped the variation in the populations on a 2-dimensional chart. Like the genetic maps of Europe there wasn't too much of a surprise. So what value-add is there in this sort of study which examines uniparental lineages, that is, genes inherited only through the maternal (mtDNA) and paternal (Y) lineages? Here's the table to look at:

As you can see, the female lineages are biased toward northern East Asian lineages, while the male lineages are biased toward southern East Asian lineages. Uniparental lineages which exhibit sex-based asymmetries gives us some information in terms of long term demographic process. Yesterday I blogged a paper about Iceland which confirms that Icelanders are a mix of British, Irish and Norse, with the Norse component predominant in the Y lineages and the British & Irish in the mtDNA lineages. Biases in the origin of male and female lineages are extremely common in the New World. The authors make the case that the Y lineages might be evidence of the spread of agriculture from Southeast Asia. I immediately assumed that before even getting to their speculation as no other social-historical phenomenon comes to mind. From Wikipedia:

Mainstream archaeological evidence derived from palaeoethnobotanical investigations indicate that dry-land rice was introduced to Korea and Japan some time between 3500 and 1200 BC. The cultivation of rice in Korea and Japan during that time occurred on a small-scale, fields were impermanent plots, and evidence shows that in some cases domesticated and wild grains were planted together. The technological, subsistence, and social impact of rice and grain cultivation is not evident in archaeological data until after 1500 BC. For example, intensive wet-paddy rice agriculture was introduced into Korea shortly before or during the Middle Mumun Pottery Period (c. 850-550 BC) and reached Japan by the Final Jōmon or Initial Yayoi circa 300 BC.

It's the intensive period that I suspect might have left a south-north genetic overlay in the Y. Here's a close up of a section of the SNP substructure paper with populations labeled: 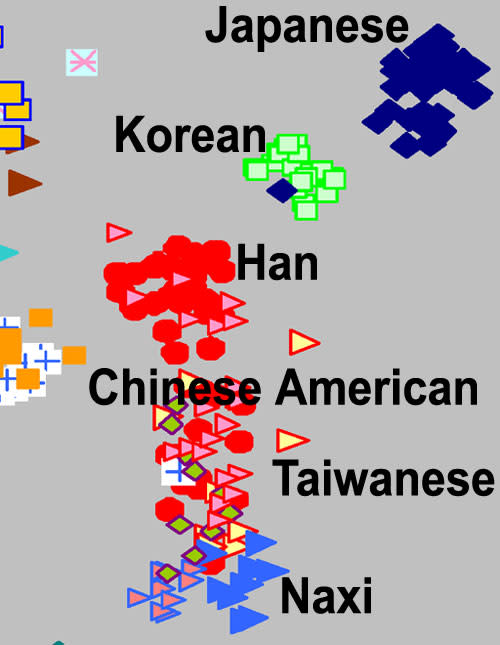 The chart is pretty straightforward, though I would note most Chinese Americans have origins in South China, especially Fujian and the area around Canton. Taiwanese are mostly Fujianese by origin. Remember this chart is based on patterns of variation within the autosomal genome, and displays the two biggest components of variation which can be extracted out as independent dimensions. The horizontal axis is somewhat suggestive to me, I have to wonder if the South Chinese, Koreans and Japanese are further to the left because they have all been subject to the expansion of rice farmers 2-3,000 years ago. Remember that the original Han Chinese culture in the Yellow River basin was based around millet dry farming, the addition of rice agriculture into the Han culture toolkit was an adoption from the indigenous peoples south of the Yangtze, many of whom were Sinicized and likely are the ancestors (at least in part) of the Chinese dialect groups. The Japanese themselves are a compound, likely of the ancient Jomon peoples with Siberian affinities, and the later Yayoi rice farmers who arrived ~2,000 years ago, and began in the southwestern islands and slowly moved east and then north (the Yayoi are the cultural ancestors of the modern Japanese, though a substantial proportion of Jomon ancestry seems likely). Finally, one last comment about the idea that this was a male mediated migration. One doesn't need to imagine a male-biased migrant population. It could be that the original rice farmers who brought the lifestyle attained a relatively high status among the indigenous peoples whom they settled. In this case one could imagine that the male newcomers could leverage their status into reproductive output to a far greater extent than the females of their group.