Kalash on the human tree

A recent paper on Turkish genetics has a tree which illustrates a summary of how the Kalash shake out: 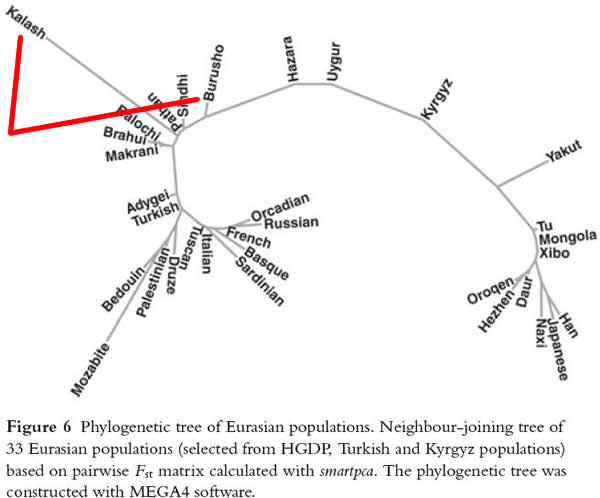 I say summary because this tree takes a lot of information and tries to generate the best fit representation. It does hide some information by the nature of its aggregation of patterns. For example, the position of the Burusho, or Turks, has to do with the fact that both of these have low, but noticeable, levels of East Asian admixture on top of a different base. If you removed this eastern element both groups would come much closer to similar groups. The extreme long branches leading to the Kalash and Mozabites are almost certainly a function of endogamy and inbreeding. Their allele frequencies diverged from nearby populations because of isolation. But notice the nearby populations of the Kalash. They're northwest South Asian. In many ways if you removed the drift and endogamy from the Kalash I suspect you'd been left with a group very similar to their Pathan neighbors. Finally, as many of you know I put a substantial number of comments into 'spam' on this weblog. Here's one related to the Kalash which you didn't see:

“Because of their light skin and hair both the Kalash and Burusho have inspired claims that they are “lost white tribes.” This is almost certainly false for the Burusho. Aside from their moderate East Asian admixture, they’re not so different from other Pakistanis in their region genetically.” LOL! You are in such denial! A lot of pseudo-scientific mumbo jumbo to spin a lie. OF COURSE they’re of European descent. Claiming European genes as indigenous makes Arabs, Iranians, Middle Easterners and Indians, like you, sound pathetic and desperate. Geneticists like you could make BRAD PITT’S genes indigenous to South Asia if you wanted to. Where there’s a will there’s a way.

The interesting thing is that this sort of comment is routinely written by white nationalists, Afrocentrists, Indian nationalists, etc. etc. of Racial romanticism often has as great a difficulty accepting the nature of the human phylogeny as those who would like to elide any substantive differences. The only thing I would note though is that this person posted as "liz" at Amardeep Singh's blog (email: beautifullydrawn@gmail.com, with an IP that traces to Alfred University) so it might beat false-flag troll.