When cafés place signs that boast "Free Wi-Fi" in their windows, they usually intend to lure patrons in—not drive them away. But in response to Sonic.net's offer to provide free Wi-Fi to the small town of Sebastopol, California, its residents whipped out their tinfoil hats and rejected the offer due to "potential risks to the health of our community" (although they thanked Sonic for the "very nice gesture"). 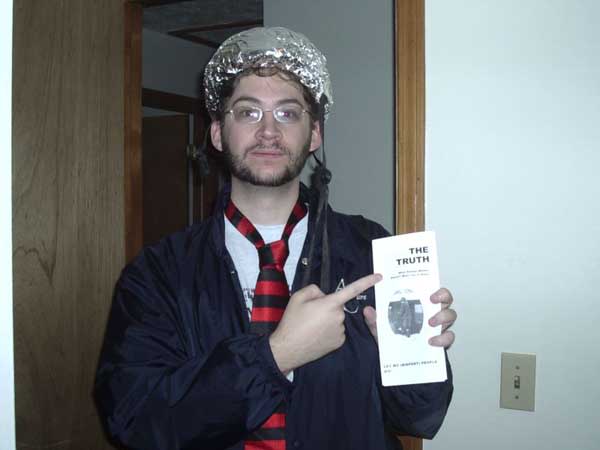 Sebastopol's city council had signed a contract with Sonic in November, but rescinded its resolution due to pleas from self-proclaimed "electromagnetically hypersensitive" (EHS) citizens, who experienced headaches and rashes in response to electromagnetic frequencies (EMF), and an online petition with roughly 500 signatures. Can the little EMF coming from Wi-Fi be bad for our health? Could blogging from coffee shops become as taboo—and illegal—as smoking in bars? Not likely. Sonic CEO Dane Jasper lists a number of independent studies on EHS on his blog, and there exist many, many, more. The latter study, specifically, showed that "the large majority of individuals who claims to be able to detect low level RF-EMF are not able to do so under double-blind conditions. If such individuals exist, they represent a small minority and have not been identified yet." In other words, while the symptoms experienced by EHS individuals are real, they are most likely psychosomatic—caused by fear, rather than the airwaves. Long before the advent of Wi-Fi, the residents of Sebastopol and all people of this planet were already bathing in EMF, emitted from radios, televisions, power lines, cell phone signals, microwaves, motion detectors, and computer monitors (which one would encounter when, say, signing an online petition)—all of which emit much more radiation than a mesh Wi-Fi network (which gives off about 0.1 watts). Further, all of these sources, including Wi-Fi, are classified as "non-ionizing" radiation, which has such low energy that it only manages to cause molecules to vibrate, inducing a heating effect—which is why your ear feels warm after you end a long cell phone conversation. Ionizing radiation, like X-rays and gamma-rays, actually have enough energy to ionize atoms and molecules, producing carcinogenic free radicals. Higher frequency non-ionizing radiation, such as that emitted by that radiation-spewing behemoth in the sky—the sun—also have enough energy to damage your DNA. Of course, no one has proven that Wi-Fi is harmless, but of all the dangers of modern society, it should be pretty low on your list of concerns. A bit more on target would be worries about the mercury and particulate pollution belched by coal plants (for your electricity), cephalopod-befuddling sonar, sweltering nights on urban heat islands, and soft drinks, to name a few.