Jello Made From Humans Is Not As Weird As It Sounds 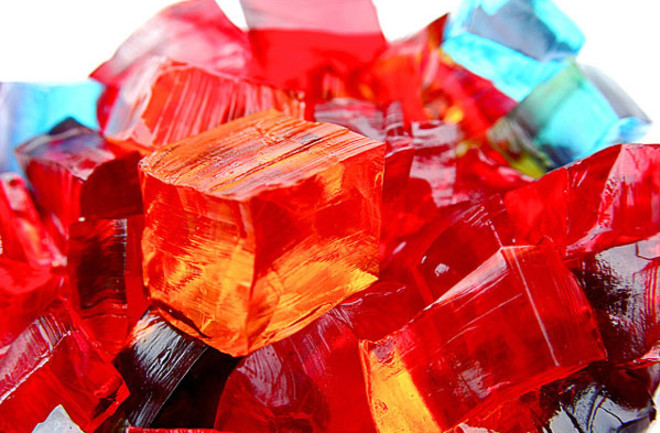 What's the News: Several days ago, a tastytidbit hit the science blogosphere: writing in a journal of the American Chemical Society, scientists reported the successful production of gelatin from human proteins. Understandably, the verdict of the crowd was, "Groooooosss!" The details of the experiment were dutifully reported---the human gene for collagen, the protein in skin and bones that makes up gelatin, was inserted into a yeast, which then cranked it out, along with the help of certain enzymes---but its purpose was sometimes glossed over in favor of giant images of quivering dessert. Like the one above. Yum. So why use human genes to make gelatin? Scientists are not actually on a mission to (a) gross us out, or (b) make us into cannibals. Gelatin, summed up quickly, is usually made by boiling and chemically processing the bones, skin, and connective tissue of animals like cows and pigs to release collagen, a long molecule that, when further broken down by heat and mixed with water, will set into a gel at room temperature. This is where your jiggly dessert comes from (apologies if I've just turned you vegetarian, or at least non-gelat-tarian). Unfortunately, this process yields pieces of collagen of all different lengths, and that can affect a product's ability to gel. Manufacturers would much prefer collagen of standardized lengths, with more reliable behavior. Furthermore, ever since mad cow disease came onto the scene, regulators have wondered whether gelatin, made from bits of many, many animals blended together, could transmit such a disease (they generally think that this isn't a problem, but it was a chilling thought). Also, it turns out that some people can have immune reactions to the animal proteins in gelatin, and since gelatin has all kinds of medical uses, including in vaccines and pill capsules, avoiding this is of key importance. All of these combined lead us to the research goal of, first, making collagen in yeast, which are unlikely to pass on diseases to us, and, second, using human genes to do it, to avoid any immune reactions, as well as to take advantage of the fact that the human collagen produced this way is of uniform length. Bada bing, bada boom. Human gelatin, thus, likely has its market niche in medical products, where these qualities are most important. Because of the gross-out factor, it seems unlikely at first glance it would replace the animal version in desserts wholesale, but who knows: grocery shelves already contain many products whose manufacture seems unsavory when consumers take a closer look. Like, for instance, gelatin.