Is Vaping Healthier Than Smoking? Here's What One Lung Specialist Can Tell Us

Vaping is often touted as a less harmful alternative to smoking. Is that true? 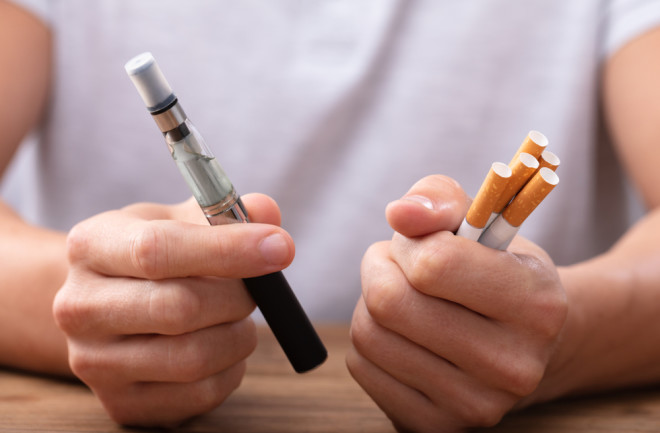 Thanks to the rise of the virus SARS-CoV-2, the health of our lungs has been brought into sharp focus. One effect of the pandemic is that people are making drastic changes to boost lung health in case they develop the respiratory illness COVID-19.

Because smoking cigarettes may raise the risk of complications from COVID-19, people have quit smoking in record numbers throughout the past year. A recent poll from University College London shows that over 1 million people in the U.K. alone have quit smoking in 2020 — and a full 40 percent have named concerns over COVID-19 as their reason why.

When people decide to quit tobacco, many will turn to vapes or e-cigarettes to get the nicotine fix that they crave. Because these devices don't have the same harmful chemicals that are present in cigarettes, they are often presented as a healthier alternative — but are they? Between smoking cigarettes and electronic devices like vapes, which one is worse for health?

“The true answer is that it's too early for us to know whether vaping is less unhealthy than smoking,” says Renea Jablonski, a board-certified pulmonologist at University of Chicago Medicine. While the long-term health consequences of smoking have been well-documented (for example, lung diseases caused by smoking kill more than 480,000 people each year), e-devices are relatively new and the effects of using them long term are unknown.

But the short-term consequences are becoming more apparent. Last February, the U.S. Food and Drug Administration and health officials sounded the alarm on an outbreak of lung injuries related to vapes and e-devices, referred to as EVALI. (The name EVALI stands for e-cigarette or vaping use-associated lung injury.) By mid-February, the CDC reported more than 2,800 hospitalizations due to EVALI, along with 68 deaths nationwide.

“The injuries we're seeing [with e-devices] tend to happen acutely and have been in patients who have been vaping only for a period of years — and often less than that,” Jablonski says. In addition to EVALI, which is a lung injury caused specifically by the additive vitamin E acetate, Jablonski has seen numerous other types of lung problems from e-devices in her clinical practice. “I've taken care of patients in the hospital who have had varying degrees of lung injury from vaping, ranging from people who need to use small amounts of oxygen and are treated with steroids, to people who have been critically ill in the ICU, who we have thought about transplantation as a potential option for their treatment.”

Surprisingly, Jablonski says, some patients who have lung injuries due to e-devices can present with the same symptoms as patients with COVID-19. “Patients have come in with fevers, shortness of breath, and even gastrointestinal symptoms such as nausea or diarrhea,” she says. “We've had some patients who have really seemed like they had COVID but have tested negative several times. It's only until you take a step back and find they have a history of vaping that you start to put it together.”

While it's commendable that cigarette users want to quit, Jablonski says, “we don't have the information yet to confidently say that e-cigarettes are safer or even less harmful — the harms might just be different.” Instead, Jablonski suggests that users who want to quit smoking find a nicotine replacement therapy that works for them, such as pills, patches, or lozenges.

“There's a valid question to ask about whether [e-devices] might be less harmful than conventional cigarettes, but we just haven't had a chance to study that yet,” she says. “What we do know is that there are other treatments and medications that we can use for smoking cessation that have a long-term track record of safety and efficacy, without the risks of e-devices.”