Is There Saltpeter in Your Saffron and Melamine in Your Milk? 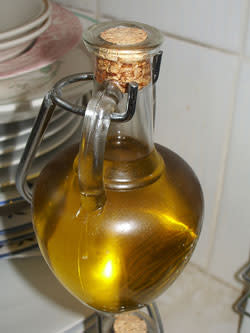 You might think that the days when unscrupulous shopkeepers mixed food with plaster or ditchwater to boost profits are long gone, on the far side of the Pure Food and Drug Act of 1906

. You'd be wrong, though: more often than you'd like to think, companies cut corners by adulterating their products with other substances, sometimes killing customers in process. Topping the list of most-frequently adulterated foods are olive oil, milk, honey, and saffron, according to a new database

put together by the US Pharmacopeial Convention

, the non-profit that sets standards for drug and food ingredients. Developed to help trace patterns in adulteration, the database includes more than a thousand cases from 1980 to 2010 and records exactly what the foods were mixed with and how the adulteration was detected, along with links to the press reports and scientific papers on each case. 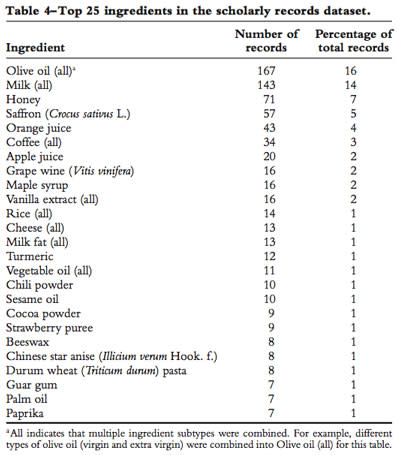 A table showing the number of cases on record for each food.

Searching by food or by adulterant, you can get a sense of what's going on with the top four. Most of the adulteration doesn't seem immediately dangerous, merely fraudulent. Olive oil is most often mixed with cheaper oils

made from soybeans, corn, hazelnuts, or rapeseed, which can be dangerous for people with allergies. Honey is diluted with cheap corn syrup and other sugars

. Saffron is mixed with all manner of other substances

, everything from sandalwood dust to saltpeter to gypsum. Out of the 194 cases

of milk adulteration, most involved mixing extra proteins in or substituting a cheaper variety of milk for an expensive one, but 24 involved the chemical melamine

, a toxic compound that makes milk register as more protein-rich on tests. One of the most infamous cases of recent adulteration, in China in 2008, involved dairy products mixed with melamine

. At least six babies died and 300,000 more sickened. Though that case didn't spread beyond Chinese borders, adulterants are a global problem. The year before, melamine also cropped up in wheat gluten used in pet foods sold in the US

, resulting in the deaths of many animals. The wheat gluten, it turned out, came from China, where food safety enforcement is notoriously lax. As this case illustrates, issues with one country's food can easily spread to others, and as more and more food is made from ingredients produced around the world, food safety agencies in the US and elsewhere will need to step up their game.

Can Crystals Cure You? Belief in the Power of Healing Stones Is as Old as Time