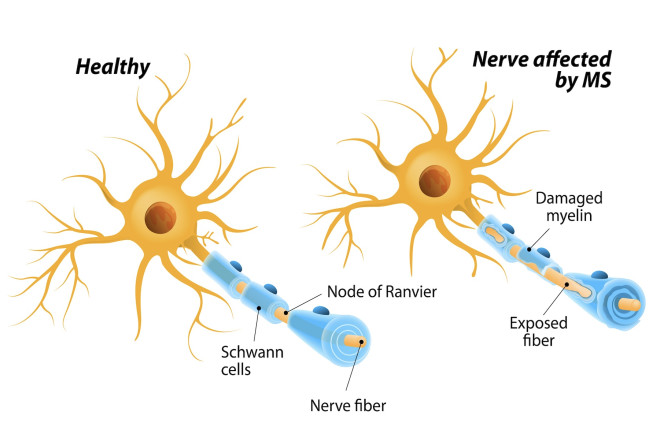 This story was originally published in our Jan/Feb 2023 issue as "The Microbe Behind Multiple Sclerosis?" Click here to subscribe to read more stories like this one.

Scientists have spent decades searching for the underlying cause of multiple sclerosis (MS), a neurological disease that afflicts nearly a million Americans. The highly infectious and exceedingly common Epstein-Barr virus (EBV) has long been a prime suspect, but firm evidence has been lacking — until now. In January, a team led by Alberto Ascherio, an epidemiologist at the Harvard T.H. Chan School of Public Health, released the first study showing strong evidence that EBV plays a key role in most cases of MS.

The paper, published in the journal Science,grew out of a 20-year collaboration with the Department of Defense Serum Repository, which stores leftover vials from the blood tests taken by active-duty military personnel as part of regular medical screenings. Testing samples collected from over 10 million service members between 1993 and 2013, Ascherio and his colleagues checked whether each individual was infected with EBV at the time their sample was taken. They then compared samples from 801 service members who developed MS afterwards with samples from over 1,500 service members who didn’t develop the disease, which occurs when the immune system attacks the insulation surrounding nerve cells in the brain and spinal cord.

Out of the MS patients, the team found only one whose serum tested negative for EBV before they were diagnosed. The researchers concluded that people with EBV were a whopping 32 times as likely to develop MS as those without the virus.

The team also measured the samples for neurofilament light chain, a biomarker of nerve degeneration that increases in people with MS. They found that levels rose only after EBV infection. And they found no connection between MS and any other virus. “We looked for antibodies to 200 different viruses,” explains Harvard University epidemiologist Kassandra Munger, a co-author of the study, “and antibodies to Epstein-Barr proteins were far and away the highest difference between the cases and controls.”

At present, there’s no cure for MS, though medication can slow its progression in some people. The study’s findings could eventually help ensure that fewer people develop the potentially debilitating disease, which can affect patients’ mobility, speech, thinking and vision. Although other factors have also been shown to increase risk — like certain gene variants, cigarette smoking, obesity and low levels of vitamin D — none come close to the association the researchers found with EBV. “This is the most compelling evidence to date,” Munger says, “that EBV is the leading causal factor in multiple sclerosis.”

In their report, the team stressed that EBV alone is not enough to trigger MS; over 90 percent of humans get the virus, which sometimes causes mononucleosis, by early adulthood. Nonetheless, Ascherio noted in a news release the day the study was published, “this is a big step, because it suggests most MS cases could be prevented by stopping EBV infection.” That’s a tall order, but there’s reason for optimism: Clinical trials of two vaccine candidates were launched in January and May, and more are in the pipeline.