This year, scientists made strides in using stem cells in treatments for human brains, livers, and hearts. 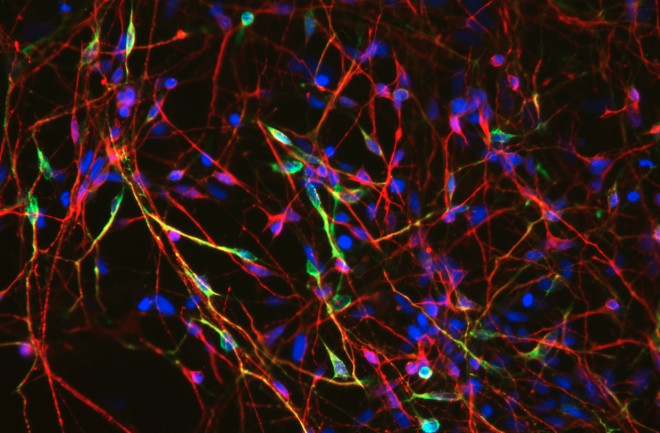 Dopaminergic neurons can be derived from induced pluripotent stem cells, or iPSCs. (Credit: The Buck Institute)

This article appeared in Discover’s annual state of science issue as “Dawn of the Stem Cell Revolution?” Support our science journalism by becoming a subscriber.

For more than two decades, experts have prophesied that stem cells will someday revolutionize medicine.

While adult stem cells have long been used to treat a handful of blood and immune disorders, the excitement has centered on two more versatile varieties: embryonic stem cells (ESCs) and induced pluripotent stem cells (iPSCs), both of which can be transformed into any cell type in the body. Google “the promise of stem cells,” and you’ll get at least 200,000 hits, involving ailments ranging from diabetes to neurodegenerative disorders. So far, however, no one has managed to translate that potential into a practical therapy.

In 2020, a string of breakthroughs suggested that the revolution may finally be near. The most dramatic news came in May, when the New England Journal of Medicine published the first case report from a study using custom-grown stem cells to treat Parkinson’s disease in humans. The debilitating condition, which affects 10 million people worldwide, primarily results from the loss of neurons that produce the neurotransmitter dopamine. Existing treatments have had limited success. Stem cell researchers aim to replace dying neurons with healthy ones grown in the lab — and the NEJM paper was the clearest sign yet that such efforts could pay off.

The authors — led by neurosurgeon Jeffrey Schweitzer at Massachusetts General Hospital and neurobiologist Kwang-Soo Kim at McLean Hospital — used what are known as autologous iPSCs. These are stem cells generated from the recipient’s own mature cells, which greatly reduces the likelihood that immunosuppressants will be needed to prevent rejection. The team collected skin cells from a 69-year-old man and reprogrammed them into iPSCs. They then guided the stem cells to take on the characteristics of dopaminergic neurons, which they implanted into the patient’s putamen, a brain region implicated in Parkinson’s. Over a 24-month period, PET scans showed evidence that the new cells were functional. The man’s motor symptoms and quality-of-life scores improved, while his daily medication requirement decreased. He experienced no side effects or complications.

“This represents a milestone in ‘personalized medicine’ for Parkinson’s,” Kim wrote in a statement. It also represented a milestone for the patient — George “Doc” Lopez, a physician-turned-medical equipment entrepreneur, whose financial contributions to Kim’s research helped make the surgery possible.

Once a record-breaking free-diver, Lopez had severe tremors and rigidity before the implant; he could barely rise from a chair. Afterward, he was able to return to swimming and diving, and to perform such mundane tasks as tying his shoes. “Parkinson’s had me under a death sentence,” he says. “[The therapy] has not only changed my life, it has literally saved my life.”

Kim cautions that a single case study is only a beginning. Much more research, including full-scale, carefully controlled clinical trials, will be needed to establish the safety and efficacy of his team’s technique. “Nonetheless,” he adds, “I believe this study is extremely encouraging and informative.” He and his colleagues plan to launch such a trial by the end of 2022. Meanwhile, other human studies using iPSCs or ESCs are planned or underway at a handful of medical centers around the globe.

A “Bridge” to a New Liver

Stem cells also demonstrated lifesaving powers for a 6-day-old baby in Japan who received the world’s first successful transplant of custom-grown liver cells. The child (whose sex has not been made public) was born with a urea cycle disorder, a genetic condition in which the liver is missing an enzyme that helps break down nitrogen into urea. Without it, ammonia builds up in the bloodstream with potentially fatal results. A liver transplant is usually needed, but it can’t be performed until the child is several months old — which may be too late. Liver cells called hepatocytes can sometimes be transplanted as a “bridge treatment,” but supplies are scarce in Japan due to low rates of organ donorship.

Doctors at the National Center for Child Health and Development used ESCs to grow hepatocytes, then injected 190 million of them into the baby’s liver. In May, the team reported that the transplanted cells had kept blood ammonia levels normal for six months, until the child received a liver transplant from its father.

Some of this year’s news was more controversial. In January, a team led by Osaka University surgeon Yoshiki Sawa reported having carried out the first successful transplant of iPSC-derived cardiomyocytes — heart muscle cells — in a human patient. The recipient, who had cardiac-muscle damage from a blocked artery, was implanted with a biodegradable sheet holding 100 million of the cells as part of a small clinical trial. The researchers, who used allogenic iPSCs derived from a donor’s cells, planned to monitor the patient over the next year and eventually try the procedure on nine more participants.

In May, however, a Chinese surgeon disputed that Sawa was first to perform such a transplant. Wang Dongjin of Nanjing Drum Tower Hospital told the journal Nature that his team had implanted two men with cardiomyocytes derived from allogenic iPSCs a full year earlier. One patient, a 55-year-old electrician, said that before the surgery, he was constantly tired and out of breath; now, he could take a walk, use stairs and sleep for an entire night.

Aside from which team won the race, both experiments leave big question marks. Although animal studies have shown promising results for iPSC-derived cardiomyocytes, Sawa doesn’t think implanted cells integrate with a recipient’s heart tissue. Instead, he speculates, they may stimulate healing by releasing growth factors. If that’s the case, Sawa’s critics say, it would be safer to identify those regenerative proteins and administer them in a less risky way, like injection.

Wang’s experiment was muddied by the fact that both patients received heart bypass surgery along with their new cells. As University of Washington pathologist Charles Murry noted in Nature, “If you do two things to somebody and they get better, you can’t say which one caused it.”

More From Discover
Planet Earth
What You Need to Know About Lyme Disease
Mind
5 Essential Neurotransmitters for Everyday Life
Health
Why Caffeine Affects People Differently
The Sciences
Gut Biome Diversity Might Shape Personality, Energy Levels
Health
Our Sense of Smell May Be More Powerful Than We Think
Health
What to Feed Your Microbes
Recommendations From Our Store
My Science ShopDiscover STEM Kits
My Science ShopDiscover 2022 Calendar
My Science ShopStrange Science
My Science ShopElements Flashcards
Shop Now
Stay Curious
Join
Our List