The term 'organic' has a long history. Today, it involves more environmentally friendly practices, but not necessarily superior nutrition in your food. 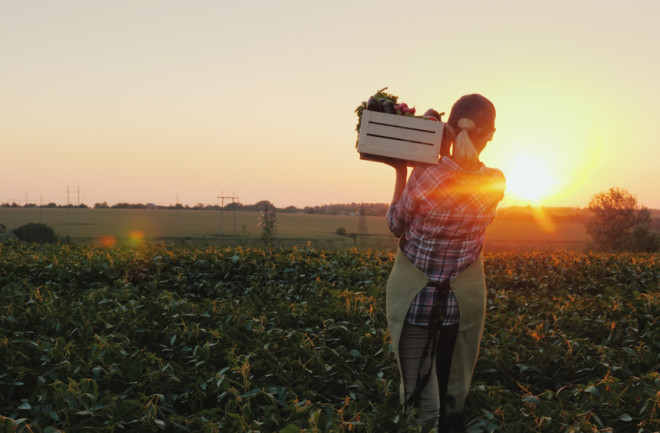 You get what you pay for. It’s what you might say, in a smug tone, when a friend cuts corners on some essential item that breaks when it’s needed most. Or it’s what you might tell yourself as you stand in an organic market, staring in disbelief at an $8 heirloom tomato and realizing you’re about to blow the whole week’s grocery budget to make a single pan of chicken cacciatore.

You might think hopefully: With prices like these, this stuff has got to be more nutritious than the cheap junk from the corner store.

Is it, though? While there are legitimate reasons to prefer organic products to their conventionally produced counterparts, the conversation is often dominated by marketing noise. Looking at the science can help us sort out the truth from the hype, and determine what benefits organic vegetables do and do not offer.

A Tomato By Any Other Name

It’s unsurprising that the benefits of organic food are hard to pin down, given that the very definition of organic has historically been rather slippery. While organic farming has been around as long as agriculture itself, it only emerged as a distinct business model in the late 20th century. The backlash against factory farming, increased awareness of the dangers of chemical pesticides and the countercultural “back to the land” movement all left consumers hankering for a more sustainable and healthful food supply.

Organic and natural became marketing buzzwords as early as the 1940s, but for decades, the terms had no strict legal definition in the United States, and regulation was nearly nonexistent. Private associations offered organic certification to farmers, but participation was voluntary.

In 1973, Oregon became the first U.S. state to regulate what could and could not be labeled as organic food. A patchwork of state regulations prevailed until 1990, when the U.S. Department of Agriculture (USDA) instituted standards for organic certification on a federal level.

Though some exceptions and gray areas remain, in general terms, organic foods (which is different than foods “made with organic ingredients”) can be defined as those farmed without the use of synthetic fertilizers or pesticides, or farmed using environmentally friendly techniques like crop rotation, composting and biological pest control measures (such as deploying ladybugs — which are harmless to humans — to get rid of aphids).

That may be reason enough to prefer them. While the U.S. food supply is generally safe, conventional growing methods raise legitimate health concerns. Synthetic pesticides derived from petroleum have been tentatively linked to certain cancers and neurological disorders, as well as to allergic reactions such as dermatitis; routine use of antibiotics in livestock has been blamed for occurrences of antibiotic-resistant bacteria in meat; and the use of human sewage sludge as fertilizer — a practice restricted under organic protocols — increases the risk of salmonella and E. coli.

Conventional farming poses environmental hazards, as well. Toxic chemicals may run off into local waterways, while industrial cultivation practices such as monocropping (that is, failing to rotate crops or let land lie fallow) can degrade the moisture-retaining properties of topsoil, leading to erosion or even transforming the land into desert.

The Dirt on Nutrition

Organic growing methods minimize all these risks. For organic produce to also have more vitamins and minerals seems too good to be true. And mostly, it is.

While a few early studies seemed to indicate that organic produce had modestly higher levels of magnesium, iron, phosphorus and vitamin C — and some organic advocates continue to make those claims — the results appear increasingly tenuous as the research piles up. A groundbreaking meta-analysis of over 300 head-to-head studies indicated that organic and conventional vegetables probably have comparable levels of most vitamins and minerals — with the caveat that conditions for all types of farming vary from location to location and year to year in ways that influence nutritional content.

Interestingly, though, organics consistently tend to be significantly higher in antioxidant compounds such as anthocyanins, flavonoids and carotenoids, with levels 20 to 40 percent higher than conventional produce. The health implications of this, however, are still unclear. Antioxidants are thought to reduce or delay certain types of cell damage, and have been credited with everything from slowing down the aging process to fighting cancer and Alzheimer’s. But long-term double-blind studies have yielded inconclusive results, and the benefits of an antioxidant-rich diet remain speculative.

Organic produce isn’t going away. As of 2011, the most recent year for which official numbers are available, more than 3 million acres of U.S. cropland were certified organic — a more than sevenfold increase over 20 years. Three-quarters of all U.S. grocery stores offer at least some organic alternatives, and organic produce now accounts for about 4 percent of overall food sales.

That’s because eating is as much about taste as nutrition, and organics do have a clear edge in variety and flavor. A tomato is by nature a very fragile thing; industrial farmers who supply supermarkets nationwide quite sensibly choose to grow thick-skinned, firm varieties that can be shipped thousands of miles without damage — but there’s a trade-off between durability and flavor. Organic suppliers are more likely to be local, and can afford to cultivate strains that are more delicate, but also more savory.

The most pressing issue, nutritionists agree, is that Americans simply aren’t eating enough fruits and vegetables, regardless of source. The health benefits of a vegetable-rich diet hold true however the produces is grown. Absent any underlying health conditions, conventional veggies — if stored properly and washed before use — provide comparable vitamin and mineral content to organic varieties. Even on a modest budget, it’s possible to serve up a healthy diet for your family. So dig in.