Is a Teen's Pain Just Drama, or Something Worse?

Subtle signs indicate that something's not quite right about this fever. 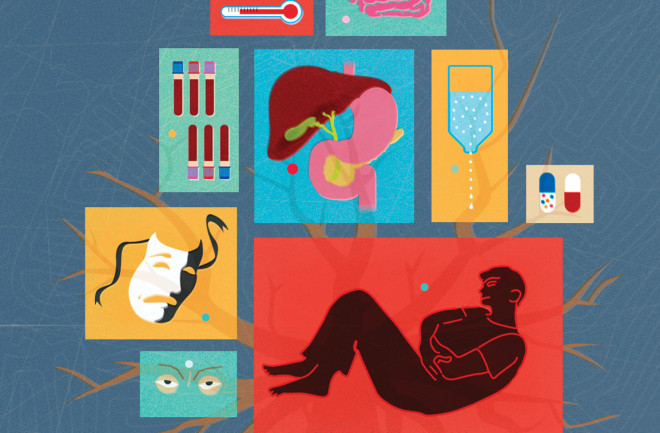 The teen shuffled past the nurse’s station, grumbling and moaning. His mother lagged a few feet behind, rolling her eyes. He made it to his room, curling up on the bed and yelling at his mother to turn off the lights.

“He’s back,” the triage nurse quipped. “I think he’s just a whiny kid. Even his mom is fed up with him.”

Colin had visited our emergency room a few days before with complaints of a sore throat, headache, throwing up and belly pain. After a negative strep throat test, he was diagnosed with a minor viral infection — something his immune system could fight with help from a few days of rest and chicken soup.

But now the 19-year-old was back — and he felt no better.

A Touch of Teenage Drama?

When I introduced myself to him, Colin grunted from under a fleece blanket draped over his head and shoulders. His mother, weary and slumped in her chair, apologized on his behalf.

“He hasn’t eaten anything or drank more than sips all day. He throws everything up,” she said. “I don’t know what to do with him anymore. He just hurts everywhere — his belly, throat, head — his whole body. He just wants to sleep all the time.”

I’ve frequently found teens with simple illnesses like colds, sore throats or stomachaches to be prone to the dramatic. Was this just a young man in need of some fluids and ibuprofen, or was something more concerning going on?

“Colin, it’s important we talk so I can figure out how to help you,” I said quietly. He peeked his head out from the covers, grimacing.

He told me his throat was better but his head was worse, throbbing mostly in the front. His belly hurt on the right, under his ribs, and he felt nauseous. He’d developed no new symptoms since his last visit — no fever, no stiffness in his neck or joints, no diarrhea, no rashes.

My physical exam revealed little besides a red throat, a dry mouth and a mildly tender abdomen. Everything else — his blood pressure, heart rate, body temperature and oxygen level — was normal.

Though Colin was grumpy and reticent to cooperate, his headache did not seem to have a serious cause, such as meningitis or a bleed in his brain. He hadn’t traveled anywhere that would prompt concern for unusual infections. I suspected the teenager just had a bad virus — maybe influenza, a stomach virus or infectious mononucleosis — exacerbated by dehydration. But I wanted to be sure that’s all it was.

“You’re dehydrated, which can cause headache,” I told him, “Let’s run some simple urine and blood tests to make sure you don’t have issues with your electrolytes, kidneys, gallbladder or liver. We can give you some IV fluids, and medication for pain and nausea, and then see how you feel.”

He grunted and curled up, pulling his sweatshirt over his eyes. He barely winced when the nurse started his IV. While he received his fluids and medications, I went to see other patients.

The nurse found me a few hours later.

“He’s not better,” she said, “Still whining that everything hurts. He threw up even after taking the anti-nausea medicine, and he just spiked a fever of 101.”

I ordered Tylenol for his fever and quickly reviewed the results of his lab tests. The abnormalities were subtle — a hint of anemia, a slightly low sodium level, a mildly abnormal kidney function, a small elevation of his gallbladder enzymes and dark concentrated urine.

Nothing was abnormal enough to give a clear answer. I returned to his bedside to seek other clues. He was writhing back and forth, holding his head and moaning. Was this just more melodrama? His mother sat in the corner, her arms crossed in frustration.

I always worry when a patient is not improving after treatments. Though I wasn’t sure what was wrong with Colin, my gut told me it could be something more than a common virus. He needed more tests, scans and observation — something best done at a larger hospital nearby. We made arrangements to transfer him by ambulance.

As we helped him onto the stretcher, his mother pointed out that the right side of his head appeared to be swollen. It did seem a bit puffy, but he’d just spent several hours lying on that side of his head. I told his mom to make sure she mentioned it to the doctors taking over his care.

At the larger hospital, I soon learned, Colin’s condition got worse. His forehead swelled, and he thrashed, cried and complained of a severe headache. His face felt numb and droopy, and his speech became slurred. These new symptoms prompted an emergency CT scan of his head. I had thought the answer was in his belly — perhaps an infected gallbladder — but in fact, the answer lay in his brain.

A colleague called from the hospital.

“He has an epidural abscess,” she said.

I nearly dropped the phone. Such abscesses — bacterial infections inside or around the brain — are rare and dangerous. Colin’s CT scan showed huge pockets of pus between his skull and the layer of tissue surrounding the brain.

This type of infection often stems from an untreated sinus or ear infection. The symptoms are initially subtle, similar to flu symptoms and other common viruses. But as the abscess grows, it pushes on the brain and makes it swell, leading to a worsening headache, seizures or difficulty moving or speaking.

The doctors put Colin on powerful antibiotics and medication to prevent a seizure. But soon after, the left side of his body became limp, he began vomiting uncontrollably and his blood pressure skyrocketed — all signs his brain was swelling dangerously. The neurosurgeons whisked him to the operating room for surgery to drain the infection and give his brain room to decompress.

Still, I remained puzzled by Colin’s abnormal gallbladder enzymes, which along with fever and vomiting, usually point to a gallbladder infection — something he did not actually have.

The doctors caring for Colin in the hospital had been similarly curious and performed further tests. It turns out Colin had a previously undiagnosed genetic disorder called glucose-6-phosphate dehydrogenase (G6PD) deficiency.

In a G6PD deficiency, an inherited defect in red blood cells causes them to break and burst when the body is stressed by infection, drugs or certain foods. Colin’s abscess must have been too much for his red blood cells to handle.

The body’s processing of these damaged blood cells creates bilirubin — a component of the bile stored in the gallbladder — and results in anemia, exactly what Colin’s initial lab tests showed. These abnormalities were not due to his primary problem, but instead a complication of it, one that had led me down a wayward diagnostic path.

Sometimes patients arrive with very specific symptoms, making the diagnosis clear and immediate. But often, an illness starts off like a tree trunk — broad and capable of branching off in many directions. With time, observation for new symptoms and more testing reveal the answer — helping us identify the right branch to follow.

With weeks of antibiotics and rehabilitative therapies, Colin improved, eventually regaining normal speech and movement. His temperament got better, too — his crankiness was not just bad teenage behavior, but instead the result of an irritated brain. Within months, he returned to school and normal teenage life — only now with a scar hiding under his hair.

Julia Michie Brucker is a pediatrician at Children's Hospital Colorado. The cases described in Vital Signs are real, but names and certain details have been changed. This story originally appeared in print as "Teen Angst."