Can ailments such as heart disease, diabetes, and high blood pressure be linked to poor conditions in the womb? David Barker thinks so—and he's not alone

Trudging to his car through the midwinter gloom, David Barker is heading home. He drives fast past winter-drab fields and deep into the English countryside. Along the way, he opines on, among other things, the role of pubs in British life, the Norman conquest of England, and the exploits of one of the area residents, Sting. If this courtly physician has anything in common with Sting, it is not celebrity. A decade ago, the "Barker hypothesis" was almost unknown, drowned out by the thunder of excitement over the genetics revolution. Heart disease, cancer, and obesity were considered mostly a matter of DNA and adult lifestyle. Barker, who heads the Medical Research Council Environmental Epidemiology Unit at the University of Southampton, broke rank by arguing that health and disease have more complex roots. Conditions in the womb and in early infancy, he said, "program" the way our kidneys, liver, pancreas, heart, and brain develop, and how they function later in life. When a fetus must adapt to a poor environment in the womb, or when infants are exposed to malnutrition or infection shortly after birth, permanent and even lethal damage is done. This view challenges not only genetic dogma but also the very foundation of public-health doctrine. "One of the most threatening things about fetal programming," Barker says, "is that it means that God may reward you less than you think for changing your lifestyle." Once derided as something Aldous Huxley might have dreamed up as a sequel to Brave New World, Barker's theory is now widely embraced, even by many of his early critics. The National Institutes of Health has pledged to plow $3.8 million into studying the fetal origins of adult disease, and partially as a consequence of this largesse, interest in the field has burgeoned. In the past couple of years, the number of scientific papers published on the topic has gone from a trickle to a steady stream, and at a recent Society for Experimental Biology conference, sessions on fetal programming were crammed. "I have absolutely no doubt that fetal programming is extremely important," says Claude Lenfant, director of the NIH's National Heart, Lung, and Blood Institute in Bethesda, Maryland. "It could explain so many things that we do not now understand. We know that most diseases result from a mismatch between genes and environment. The question is, when does the 'environment' piece begin—when you take your first breath of air, or earlier? I say it's earlier. Like Barker, I say it's in the womb." To understand fully Barker's thinking, it is first necessary to let go of the cherished myth that mothers-to-be sacrifice all to the next generation. The bitter truth is that growing teenagers and undernourished or vitamin-depleted women are less able than other mothers to nourish their fetuses. When pickings are slim, the fetus loses out. A malnourished fetus must perform a sort of triage, diverting nutrient-rich blood to the most vital of vital organs—first the brain and then the heart—thereby shortchanging other parts. Because these organs grow at different rates—some continuing to develop into the first few years of childhood—the impact varies depending on when and what sort of malnourishment occurs. The baby may be born looking and acting healthy but with a liver, kidney, or pancreas subtly compromised in a way that will show up later in life. And a woman who begins pregnancy in a less-than-healthy state may have difficulty passing nutrients through the placenta, depriving her baby even if she eats well.

David Barker sits among the thousands of health records that helped him make a case for the impact of fetal nutrition on adult health. "When I talk about the importance of nutrition in fetal health," he says, "every mother knows it and looks at me pityingly when I explain it." 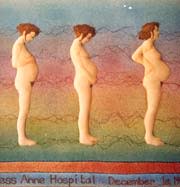 While Barker's hypothesis has enjoyed growing support over the past decade, some continue to argue that it overstates the case. Michael Kramer, a pediatrician and perinatal epidemiologist at McGill University in Quebec, argued in a 1996 commentary in The Lancet that Barker tends to ignore data that contradict his thesis and that there is no shortage of published studies whose results do not support the fetal/infant-origins hypothesis. Kramer says that while he does believe "there is an association between impaired fetal growth and adult chronic disease," he is not convinced that this association means that fetal conditions determine or even affect adult health. Others note that Barker's theory does not explain why normal-weight women consuming a balanced diet may also have low-weight newborns. In these cases, they argue, the problem may stem from genes or environmental influences controlling the development of the placenta, which regulates the transfer of nutrients from mother to fetus. David Phillips, an endocrinologist and a colleague of Barker's, concedes that epidemiology can never prove causation but that "20 to 30 years or more of animal work examining the adverse effects of exposures in pregnancy" have made Barker's epidemiological findings all but irrefutable. Recently, a member of the Southampton group showed that rats born to mothers fed a low-protein diet have high blood pressure. Other scientists have shown that animals deprived of protein or certain vitamins in the womb grow smaller livers and kidneys and less-flexible blood vessels. "We've found evidence in both sheep and rats that if you produce very mild changes in maternal diet, you can mess up the vascular and endothelial cells, which dictate constriction of the blood vessels, and also mess up the hypothalamic pituitary axis, which is involved in almost everything," says Mark Hanson, a physiologist and director of the Southampton Centre for the Fetal Origins of Adult Disease. Whether this animal data can be extrapolated to humans is uncertain, but Barker is not relying solely on animal studies to vindicate his ideas. Since 1998 Barker's team has conducted a survey of 12,000 Southampton women between the ages of 20 and 34. They are monitoring the women's diets, body composition, and vital statistics, and waiting patiently for what they hope will be a healthy number of them to get pregnant. So far 1,500 have obliged, among them Lynne Allan, a 29-year-old cartographer who drops in for her checkup the day I visit. Lynne is eight months pregnant and remarkably good humored as she is scanned, questioned, and measured for nearly two hours. "What we're doing here is using a sledgehammer to crack a nut," says study coordinator Hazel Inskip, a statistician. "Epidemiology is the most powerful tool we've got, but the birthrate here is so low that we're forced to follow this large group to get at the data we want. Since you can't experiment on people, you have to observe them, and that takes time and an extraordinary level of commitment on everyone's part." By monitoring women's health before, during, and after pregnancy, and following their children, the Southampton group hopes to tease out what factors in the mother's nutrition affect fetal development and child health. "What we really want to find," says Southampton public-health specialist Catherine Law, "is a way to effect change. And the changes we are talking about require long-term reconsideration of behavior and social influences and focusing on the promotion of health rather than treatment of disease. Observational science such as this is by its nature uncertain, and for that reason there has been a perception that it's not 'real science.' But there is no question that the smaller you are as a baby, the riskier it is for you to grow large as an adult. That risk is very real." Barker has little patience for those who refuse to accept what he considers to be the patently obvious fact that health has its genesis in the womb. "American epidemiology has gone off on a boil, gone off to rooms filled with paper and no patients," he says. "Everyone has an Uncle Charlie who lived a grand life, drank, ate up a storm, and died at 100, while another guy lived a blameless life and died of coronary heart disease at 45. We can't blame everything on genes and go to sleep, because genes don't quite explain it either. People have to open their minds to the terrible possibility that we might be right—that the important events in the development of a child happen not at conception but years before. We don't need any more whacking big insights on this—we know that it's true. All we need now is for others to join the show." 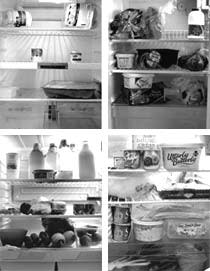 The refrigerators of four participants in the Southampton Women's Survey—the world's largest study tracking links between the health of mother and fetus. Since 1998 the survey has recorded the diet and lifestyle of more than 12,000 young women in Southampton, England. Participants are given extra checkups and scans when they get pregnant. Photographs by Magda Segal.