One of the consequences of having a blog is that people occasionally offer to send you free stuff. Not out of the goodness of their hearts, for the most part; rather, because they'd like some free publicity in return. Usually it's a book of some sort, and usually I just decline; I can't possibly get through all the books I hope to read on my own, much less other books that people want me to read. So when I received an email from Kimberly Moniz at SHIFT Communications asking if I'd be interested in receiving a free sample to possibly mention on the blog, I almost replied automatically in the negative. But then the nature of the product sunk in, and I paused -- this wasn't a book, this was booze! Specifically, Canadian Club whisky. I'll admit that I'm an occasional Scotch drinker, but not much of a Canadian whisky fan. To be honest, the mention of Canadian Club conjures images of something my grandmother would have been drinking (while smoking her Pall Malls), although that seems to be changing. I suspect the marketing people recognize that, and thought it would be good to freshen their image among a younger, hipper crowd. And what better way to do that than by reaching out to science blogs? (Especially ones that occasionally rhapsodize about the perfect martini.) This is some new-media marketing savvy I can get behind. Also, free booze. But our honor is not sold so cheaply -- we're not going to provide free advertising just because someone sends us some loot. We have our scruples, and everything we post must adhere to the guiding principles of our Mission Statement. But then I remembered that our Mission Statement says we post about whatever we feel like posting about. Still, we like to convey at least the illusion of integrity. So I hit upon the perfect solution: talk about the whisky, but do so through the lens of Science! That is, we would accept the free booze, but only under the understanding that we would subject it to a rigorous taste-test in comparison with other comparable whiskies, apply the time-honored techniques of the experimental method to the results, and publish whatever they might turn out to be. Kim was up for this adventure, so we set the wheels in motion. Results below the fold. 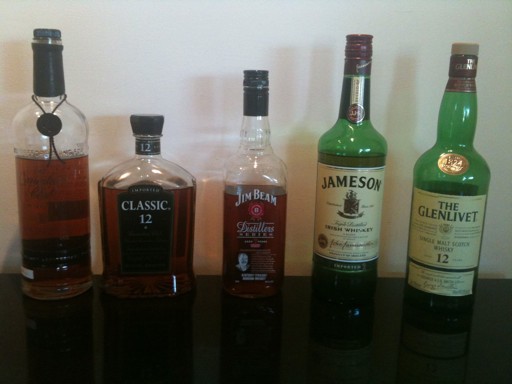 We were sent a bottle of Canadian Club's super-special 30-year-old whisky, as well as a bottle of their slightly-special 12-year-old offering. I judged that it would make the most sense to put them up against a variety of other kinds of whisky, so we assembled a worthy array of adversaries from around the globe. (Note that the Scots and the Canadians spell it "whisky," while the Americans and Irish use "whiskey," so there's no consensus choice in this case.) From left to right, we have the two Canadian Club entries; a bottle of Jim Beam Distiller's Series, a Kentucky bourbon; Jameson, a classic Irish whiskey; and Glenlivet, a well-known single-malt scotch. I wasn't smart enough to keep track of the prices for the different bottles, but you should imagine that the 12-year CC is about $18, the Jim Beam is about $18, the Jameson is about $23, and the Glenlivet is about $35. The 30-year CC is apparently a collector's item that will set you back about $200. Then, to the experimental procedure. I rounded up a few friends (8 people in all), none of whom were really whisky experts, but none of whom were really averse to the idea, either. One of them was Risa, who was passing through town for other reasons, so it was a true Cosmic Variance event. We disguised the bottles by putting them all in plain brown bags and assigning numbers to each. All of the testers were given samples of each whisky, as well as a score card where they were asked to give each entry an overall score between 1 and 5, as well as to write down more specific impressions. And here are the results! Complete with error bars (at least, standard deviations computed from the raw data), so that makes it science, right? 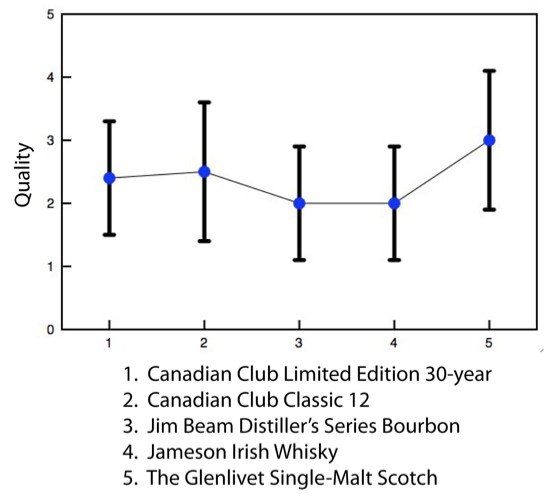 And the results are -- inconclusive. Well, that's not exactly true. We learned a lot, actually. It's true that all of the scores ended up being within the error bars of each other. So we didn't technically learn a lot about whisky. But we learned a lot about the proper experimental protocol for conducting a whisky tasting! Mostly, I don't think we gave people enough of it. That is, more than one person remarked that it took more than a couple of sips to really start to appreciate the merits of any individual liquor. If we were to do it again, we'd take more time, offer lots of food, and let people really enjoy each of the offerings, so that their individual ratings were more reliable. In the meantime, if you'd like useful insight into the nature of these different drinks, you'd be better off checking out Drinkhacker or similar sites. They actually know what they're talking about. The other thing we learned is that, despite the obvious scatter in the numerical results, people did have somewhat consistent reactions to the different whiskies. Both kinds of Canadian Club were judged as sweet, mellow, vanilla; the Jameson was lighter and thinner; the Jim Beam was a bit more harsh; and the Glenlivet was thought to be more complex but softer. It's just that different people liked different characteristics. So perhaps there is no absolute scale of whisky achievement, but rather a subjective relationship between the liquor and the imbiber? Of course, down that road lies moral relativism and nihilism, and ultimately the Taliban will win, so we should probably avoid that path. Most of all, we learned that we like getting sent free stuff that doesn't require hours of our time to read and think about. Other good possibilities for this category might include: iPads, trips to Vegas, and Tesla roadsters. You know where to find us. Finally, here's the scientific explanation behind the production of Canadian Club whisky. Thanks to Kim Moniz for sending this, as well as the whisky, and for playing along. And apologies for my usual tardiness -- it took a while to put the tasting event together, and then I went and lost the score sheets for a matter of months. But science eventually triumphs!

Production Process of Canadian Club Canadian Club is made from a blend of corn, rye, rye malt and barley malt. Once the grain arrives at the distillery it is split up: the corn is milled and put in a premix tank where water is added to prepare it for cooking. The other grains are milled together, mixed with water and the product, called mash, is then transferred to the batch cooker. The cooked mash is moved from the batch cookers to conversion tanks where malts are added to change the starch into fermentable sugars. Once the malts are added it produces high sucrose mash, which is then transferred from the conversion tanks to the fermenters. There are 39 fermenters in the distillery, each stands over three stories high and is able to hold up to 218,000 liters. Once the fermenter is filled with the high sucrose mash, two types of yeast are added to the mix –commercial yeast is added to the corn mash, while a specially developed yeast patented in 1858 by Hirman Walker is added to the blender grains mash. After 72 hours of fermentation, the product is 11% alcohol and is referred to as “distiller’s beer”. The fermented mash is pumped into a whisky still where it flows through horizontal filtration plates. Steam is injected at the base of the still and as it rises, it causes the alcohol to evaporate out of the mash. The alcohol is then carried to the top of the still and condensed into liquid form called “new whisky”(this is the process of distillation). The “new whisky” is then run through other stills in order to remove unwanted elements, such as fusel oils. The removal of these items is what makes Canadian Club have a light, smooth flavor. The corn distillate is now 95% alcohol per volume, colorless and odorless. The blended grains are distilled through the column still, but at a lower alcohol strength in order to produce a higher grain character in the taste of the whisky. The grain mash is further refined in a copper still, enhancing the flavor of the whisky. After quality control checks, each whisky is then pumped into large blending tanks prior to aging. This process is referred to as pre-barrel blending (blending the corn and grain mash), a unique process to Canadian Club. The colorless new whisky is then pumped to drain and fill where it is tapped into the once used American oak charred barrels for its aging process.