Three and I'm under the table

It's unusual, in this muddy imperfect world of ours, that we have the ability to conjure up perfection when the moment calls for it. Thank goodness, then, for the martini. A simple enough thing: mix four parts gin and one part dry vermouth into a cocktail shaker over ice. Shake, and strain into a martini glass. (No need to rush; a tiny bit of dilution from the melting ice can help bring out the flavor.) Garnish with an olive or two. Simplicity is often a grace of perfection. Enjoy before dinner after a long day of solving equations, or later at night between sets at a smoky jazz club. Really we should just stop there, and returning to our regularly scheduled string-theory-and-God blogging. But it is not in human nature to accept perfection in an appreciative stillness; we have to go mucking around, trying to make it even better. And thank goodness, or some enterprising bartender never would have invented the martini in the first place. Alas, mucking more often leads to tragedy than to triumph, and some wheat/chaff separation is in order.

The martini's perfection is deceptive because of its near-inevitability. Every aspect of the cocktail manifests its individual degree of perfection, so we are hardly surprised (that is, not as much as we should be) when it all comes together so elegantly. Gin, originating in the Low Countries and elevated to iconic status in Britain, forms the foundation of this quintessentially American drink. The basic white grain spirit is enlivened by the slightly exotic flavors of juniper and other botanicals. It's everything you want in a foundation: solid and agreeable, perfectly transparent without being empty or boring. Dry vermouth, a fortified wine that is quite acceptable as a separate aperitif, but only reaches toward divinity in its role as a secondary ingredient against the gin. And the olives, suggesting a touch of the Eastern Mediterranean, adding a worldly spiciness and lush green roundness to the austerity of the cocktail. But the experience of a martini extends beyond the ingredients. We have, most obviously, the glass: a perfected artistic form, functional as well as attractive, borrowed shamelessly (and understandably) for a myriad of lesser purposes. We have also the mixing procedure itself; a proper metallic cocktail shaker is one of those accessories that is worth investing in. There is a myth going around, if you hang out on the wrong street corners, that shaking will "bruise" the gin. Rubbish, of course. But go ahead and stir if you like -- you can avoid tiny bubbles that may cloud your drink, but you'll miss out on the sensual pleasure of the act of shaking itself. Now, let it never be said that I am a fundamentalist. A little deviation from orthodoxy can be a good thing. Indeed, replacing the traditional toothpick with an artistic metal pick can add a touch of class to the presentation. If you'd like to experiment with whimsical modifications of the traditionally-shaped glass, be my guest, although you're operating at your own risk. It's occasionally fun to use olives stuffed with blue cheese or garlic or -- my favorite -- a bit of jalapeno pepper. Heck, you could even replace the olives with a twist of lemon, although at that point you risk sacrificing taste for visual impact (a completely unnecessary compromise, in this instance). But there are some roads that we have no good reason to walk down, and two of them have become all too well-traveled: dryness and vodka. Original martini recipes called for nearly equal proportions of gin and vermouth, and only later did experimentation reveal that a much smaller proportion of vermouth made for a more successful drink. Four-to-one is about right, although there is room for variations in taste. But this worthy discovery has devolved into a pointlessly macho competition about whose martini is the driest. Bartenders now regularly splash vermouth into their shakers and then pour it out before adding the gin, leaving behind a helplessly thin coating of the original spirit. The next step is to simply pour chilled gin into your glass while doing a Google image search for "vermouth." There is a name for the resulting drink: it's called "gin." It's not a cocktail, it's just a straight spirit, one step removed from doing shooters of grain alcohol. The success of the martini comes from the symbiotic mixture of different spirits, as Fareed Zakaria has persuasively argued. Vodka, of course, is a perfectly enjoyable spirit in its own right. It should be served as cold as possible, in shot glasses, alongside black bread and earthy Slavic accomaniments like caviar and pickles. The thing about vodka is that, in its purest form, it is basically tasteless. This makes vodka an excellent backdrop for all sorts of flavorings, which is why flavored vodka is so popular. (You'll never walk into a liquor store and see flavored gin -- at least, I hope not.) But it makes it useless for a martini, especially a dry one. Gin, dry vermouth, and olives all taste like something, and it is the miracle of those tastes working together that creates a transcendent cocktail. And now we've come right up to the point where my inner cranky old man takes over from the face of youthful libertinism that I present to the world. Because, from replacing gin with vodka, it's a short step to the multiple horrors foisted on the drinking public that appear on "martini lists" in many of our finest establishments. Look, you can drink whatever you want. And I have nothing against color or sweetness for its own sake. But if you mix together a concoction involving any sort of Kahlua or Frangelico or raspberry liqueur -- call it what you want, but it's not a martini. It doesn't matter that it involves alcohol and is served in the traditional martini glass. It's a mixed drink, but it's not a martini. Just because you stick a tail on a watermelon, don't make it a pig. See, I like to think that words have meanings. And the word "martini" has a perfectly good referent -- the above-discussed cocktail, worldwide symbol of elegance and sophistication. And this martini has certain qualities. And none of these qualities involves "fruitiness" or "sweetness." Sorry. Martinis are astringent, challenging, an acquired taste of limitless reward. They are not fluorescent concoctions redolent of high-fructose corn syrup. Don't get me wrong; some of these drinks can be quite enjoyable. I recently went to the Raw Bar here in Chicago and sampled the "Barry White martini," which was appropriately dark and satiny and certainly not a martini. At Aquitaine in Boston I had something called the "Icicle," made from Icelandic vodka and ice wine with a frozen grape -- also enjoyable, also not a martini. Why use a perfectly precise word when you really mean something else?

The most successful non-martini cocktails take the lessons of the martini and use them in innovative ways. My personal favorite is the sidecar: three parts cognac, one part each Cointreau (orange liqueur) and lemon juice, decorate with a lemon twist. You can even put sugar on the rim without doing violence to the basic conception of the drink. Sidecars are a little sweet, but the fundamentally robust nature of the cognac provides an effective counterweight, and this would never be accused of being a frivolous drink. (Edging toward frivolity, we have the "between the sheets": equal parts cognac, Cointreau, lime juice, and white rum, served with a twist. But it's good, I have to admit.) 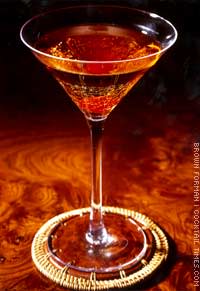 Still, the cocktail that in some ways is the most impressive is the Manhattan: three parts bourbon, one part sweet (red) vermouth, dash of bitters and a splash of cherry juice, served with a Maraschino cherry. You can see the basic similarity to the martini template: robust foundational spirit, secondary aperitif-oriented spirit, colorful garnish. But the martini, composed of ingredients of individual perfection, was destined to succeed. Meanwhile, the fact that the Manhattan works at all is a minor miracle. Its ingredients are individually barbaric -- I mean, bourbon? cherry juice? -- that work together in an impressive high-wire act, the coarseness of the bourbon playing off the sickly sweetness of the cherries. When it succeeds, it's a feat worthy of our admiration. These cocktails don't try to sully the worthy martini name by pretending to be what they're not; they succeed on their own terms. I'm even prepared to grant a place to the much-maligned Cosmopolitan (vodka, Cointreau, lime juice, cranberry juice), unless you try to call it a martini. The Sex in the City gals needed to be drinking something light and colorful -- the transparent severity of a true martini would have undermined the mood. Happy holidays. And if you can find a bartender that does right by you, tip well. You'll feel good about yourself, and your status will be elevated in the eyes of persons of whatever sexual identification and preference you hope to impress.