In Bird Flu-Swine Flu Hybrids, a Clue to What Makes a Super-Strain 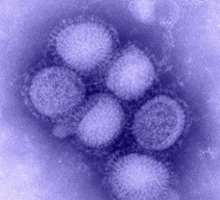 Swine flu is not gone, and it is not stagnant. Though the public health scare about the 2009 swine flu pandemic subsided, the virus—like avian flu—remains in pockets of animals, shuffling its genes while hidden from the watchful eyes of virus experts. Virologists call this genetic switcheroo "reassortment," and it's how new and dangerous strains of flu snuck up on humankind in the past—and how they could do it again. This time, though, virologist Jinhua Liu and colleagues are trying to get a jump on the viruses. For a new study in the Proceedings of the National Academy of Sciences today, this team of Chinese researchers simulated what could be a dire situation for humans: swine flu (H1N1) and avian flu (H9N2) together in one animal. When these flu strains are together they can exchange genetic material. So to test what that mixing might produce, Liu's team swapped genes between the two and created 127 hybrid viruses, testing each on mice.

Eight of these hybrid strains turned out to be more virulent and dangerous in the mice than their parent strains of swine flu and bird flu. [National Geographic]

According to Dutch virologist Ab Osterhaus, we can't be sure that these eight nasty strains are the ones that would hit humans hardest—animal studies aren't perfect.

"Mice mirror, to a certain extent, what happens in humans," he says, but they are not perfect model animals. Liu agrees. He plans to investigate how contagious his new viral blends are in guinea pigs and ferrets—animals whose respiratory system better reflects our own feverish battle with flu. [ScienceNOW]

But Liu's mouse study provides a insight into why those few mutants became more virulent than their predecessors. According to the study, all eight of the extra-powerful viral strains possessed the PA gene of the swine flu strain that traveled the world in 2009. In addition, the scientists also created pairs of viruses they could study side-by-side, in which everything was the same except for the PA gene—one virus in each pair had the 2009 swine flu version and the other had a different version. Looking at 24 such pairs, 11 times the version with the swine flu PA gene was deadlier than its counterpart, and only twice was it less virulent (in the 11 other pairs there was no discernable difference). What would happen if, say, bird flu strains carrying the swine flu PA gene emerged in people? From the study:

It's an important clue. Reassortment between viruses, Liu writes, is what created the terrible strains that killed millions during flu pandemics in 1957

. The 2009 version of H1N1 contained genes mostly from the pig lineage of the virus, earning it the name swine flu, but it also contained genes swapped in from human and avian versions of the flu. (Evolutionary biologist Michael Worobey, who was part of the team tracking swine flu's evolution, describes it in detail in this video

.) Liu says we ought to do all we can to keep animals (and ourselves) from becoming infected with multiple strains, giving the viruses the chance to exchange genetic material. But we can't stop reassortment altogether; we simply can search for clues like this PA gene that might identify the next big one before it spreads too far. Related Content: DISCOVER: The Evolution of Swine Flu (Video)

80beats: HIV's Primate Precursor Is Very Old. Why Did It Jump To Humans So Recently?

80beats: The Swine Flu Virus Is Evolving. Are We Paying Enough Attention?