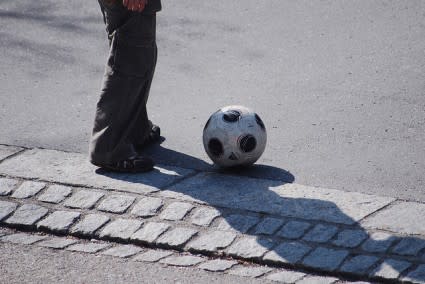 A small study has found that homeless men in Copenhagen, Denmark, who took part in 2-3 soccer games per week for three months showed significant improvements in measures of physical health afterward compared with those who continued their normal routines. While the results aren't exactly surprising, given the known benefits of the kind of intense physical exercise involved in soccer, they provide some hard evidence that sport can have concrete benefits for the homeless. Part of the motivation for the study was the success of the Homeless World Cup, an annual soccer tournament started eight years ago that has involved 100,000 people and participants from 64 countries around the world, according to the organization (in case you were wondering, Scotland won this year's tourney). Men who played "street football" for 12 weeks had decreased body weight and levels of LDL cholesterol, the "bad" cholesterol. The study also found the men who played soccer had an 11 percent increase in peak oxygen uptake, a good measure of overall fitness closely linked with the risk of heart disease. The results are encouraging since playing four-on-four soccer can be rather easily done even in poor areas—all you need are eight people, a ball, and rudimentary nets or goal markers—and the benefits are likely to extend to mental health and improved friendships/positive relationships with others. They are limited, however, by the lack of a randomized control group: the 10 men who continued their regular routines chose to do so (due to ethical concerns, the homeless shelter declined a randomized trial). It would also be interesting to set up a control group in which participants engaged in a activity that wasn't physically demanding but did involve socializing and competition---like a board game, perhaps. This could help quantify the benefits of the various positive activities involved in soccer, although it's understandable that a study involving such a thorny problem like homelessness would want to keep things simple. Homeless men fit with pedometers in the control group weren't exactly inactive, taking 10,000 steps per day on average. But this walking didn't involve the type of intense activity seen in the soccer players, and none of the health markers studied in this group improved. Men were recruited at homeless shelters and unemployment officers in Copenhagen, and 75 percent of them attended games (a relatively high number, researchers say). The study is a reminder of some of the enormous problems facing the homeless: 70 percent of the men surveyed regularly smoked marijuana and tobacco, and 65 percent were former or continuing drug addicts (not including cannabis). But involvement in a sport like soccer could—and has—helped some taken first steps to improving their lives. Reference:  Randers MB, Petersen J, Andersen LJ, Krustrup BR, Hornstrup T, Nielsen JJ, Nordentoft M, Krustrup P. Short-term street soccer improves fitness and cardiovascular health status of homeless men. Europen Journal of Applied Physiology. 2011 Sep 29. Link.