I'll Have My Burger Petri-Dish Bred, With Extra Omega-3

How researchers can make meat that's better for you—and better for animals. 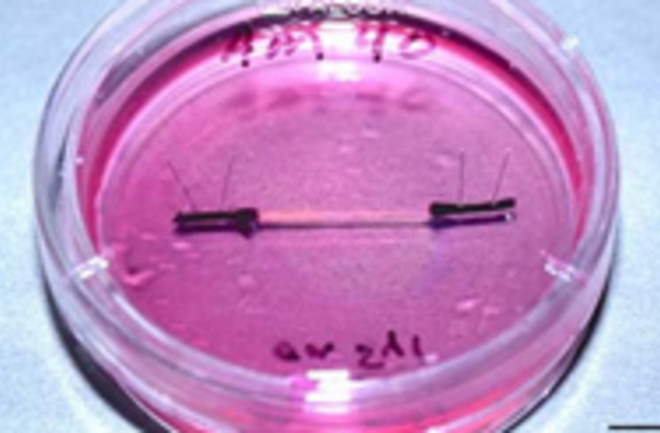 How do you prefer your beef? Certified Angus, grass fed, or culled from a petri dish? That last option may be coming your way soon, courtesy of Jason Matheny*, a biologist at Johns Hopkins University. He is the founder of New Harvest, a loosely knit consortium of international scientists who are investigating an innovative new way of satisfying the world’s craving for meat. They plan to grow it in a lab—no animals required.

Lab-grown meat won’t make many top-10 lists as a natural food, but the New Harvest Web site calls it “less unnatural than raising farm animals in intensive confinement systems, injecting them with synthetic hormones, and feeding them artificial diets made up of anti­biotics and animal wastes.” Known as in vitro or cultured meat, the end product, grown from stem cells, could alleviate environmental and health concerns associated with most animal protein (not to mention moral qualms about eating animals), making it the cut of choice.

To a certain extent, in vitro meat has already been produced hundreds of times in labs around the world, as stem cell researchers crank out bits of artificial muscle and connective tissue, hoping to mend weak hearts or reverse muscular dystrophy. But only a brave few have engineered tissues expressly for the purpose of making hamburger. In 2000 NASA engineered a bit of goldfish meat as a possible food for astronauts on marathon journeys, and in 2003 a group of Australian artists with a background in tissue engineering served tiny portions of petri-dish muscle (drowning in sauce to avoid the flavor question) to an invitation-only dinner party.

Currently, most research into lab-grown meat comes from biologists in the Netherlands. The Dutch government is funding the work, perhaps a natural fit for the first country on the planet to have a Party for the Animals in its legislature. Henk Haagsman, one of the lead scientists on the Dutch project and a member of the New Harvest advisory board, says the key to making in vitro meat is to get stem cells to divide repeatedly, ultimately spawning billions of offspring; those daughter cells would then fuse and mature into a uniform, solid block. So far, Haagsman has created a small layer of fused meat cells—something akin to the world’s thinnest slice of bologna—grown from a single pig-muscle cell.

For cells to mature, they must soak in a nutrient-rich soup. The current soup—costly “fetal bovine serum,” or calf’s blood—may soon be replaced by an inexpensive, plant-based substitute that offers a major advantage: It avoids using any animal-based products, satisfying the ethical concerns of some vegetarians. As the cells mature, they must also be stimulated to move as they would be by bone growth and body movement in a living animal. This is done by giving electric jolts or by manually stretching the polymer scaffolding that anchors the cells. In the course of stimulation, the cells convert from what scientists describe as “meat-flavored Jell-O” to the striated, textured fibers we associate with steak.

Until researchers get stem cells to regenerate uniformly, however, test-tube meat at the deli could remain just a dream. If edible beef is the goal, you don’t want any hoof or fur mixed in with it, but as of now, scientists cannot consistently control what type of cells are produced.

Growing meat from single cells could reduce the opportunity for disease and contaminants to enter the food supply and eliminate the environmental impact (such as clearing Amazon rain forest to create grazing land) of raising livestock. Moreover, Methany contends, the meat would be healthier and could be nutritionally enhanced. “You could have a hamburger with the fatty acid profile of salmon,” he says. “It could prevent heart attacks rather than cause them.”

The scientists working on cultured meat believe its flavor should eventually compare favorably to that of natural meat, but Methany says so far he doesn’t know of any scientist who has taken a taste. “At least they haven’t fessed up to it, but at the end of an experiment, you’ve got tissue, so why not bread it and fry it up?”

Long before lab-grown beef reaches your local diner, you may find yourself chowing on a different kind of technologically enhanced meat: the omega burger, fortified with that fatty acid known as omega-3.

Health-conscious consumers already seek out canola, flaxseed, walnuts, and soy products rich in beneficial alpha-linolenic acid (ALA), an omega-3 fatty acid. Even more dramatic effects on human health have been documented with eicosapentaenoic acid (EPA) and docosahexaenoic acid (DHA), the longer-chain lipids found in fish oil. These substances have shown promise for the treatment and prevention of diseases from type 2 diabetes and rheumatoid arthritis to asthma, cancer, dementia, and, most conclusively, heart disease. “We could probably eliminate 40 percent of cardiovascular disease in the United States if we could engineer the food supply to have at least two grams a day of EPA and DHA,” says biochemist Joseph Hibbeln of the National Institute on Alcohol Abuse and Alcoholism in Bethesda, Maryland.

Unfortunately, those fatty acids may be running low in the global larder. The best dietary source of long-chain omega-3s are oily, cold-water fish such as salmon, tuna, herring, and mackerel. Yet many of these fish populations have experienced massive declines since the 1970s. Other foods can be infused with EPA and DHA, but only up to a point. Chickens that are fed fish extracts and algae oils produce eggs and flesh with enhanced concentrations of long-chain fatty acids, and omega-3 eggs are already a supermarket staple. But getting the good lipids into other livestock is more difficult. Fish oils and algae extracts are too expensive to feed to larger animals. There is also a problem with the multi­chambered stomachs of cattle and sheep: They convert healthy, poly­unsaturated omega-3s into very unhealthy saturated fats.

To solve this last issue, animal re-­searcher Scott Kron­berg at the USDA Agricultural Research Service (ARS) lab in Mandan, North Dakota, is feeding sheep flaxseed that has been treated to prevent conversion of ALA into saturated fat. Those sheep were found to have 25 percent more omega-3s in their muscle than did grain-fed animals. Grass-fed cattle also benefited by eating the treated flaxseed; their beef contained almost half a gram of omega-3s per eight-ounce serving. But most of those omega-3s were in the form of the less-useful ALA. “If we could come up with a cheaper source of EPA and DHA for feed, it would be worth looking at too,” Kron­berg says.

Other researchers are doing just that. Bioprocess engineer Rafael Garcia of ARS and biochemical engineer Zhiyou Wen of the Virginia Polytechnic Institute and State University in Blacksburg are designing a study to grow EPA- and DHA-producing microbes using low-cost by-products of other processes, such as glycerol from biodiesel production and rendered animal protein from slaughterhouses. The microbes could then be used to make an inexpensive livestock feed supplement.

And then there is the EPA-enhanced pig genetically engineered by Randall Prather, a livestock reproductive biologist at the University of Missouri–Columbia National Swine Resource and Research Center. Prather cloned pigs that carried an enzyme for converting less-beneficial fatty acids into EPAs. Not only do the clones carry up to 15 times more EPA than do normal pigs, but they also appear leaner and more active. Prather’s pigs won’t be going to market anytime soon, however; no transgenic animal has yet been approved for human consumption in the United States. Although Prather has no plans for testing the enzyme on cattle, other researchers do. Can the omega-3 burger be far behind?

More From Discover
Health
Ibogaine: The Psychedelic Drug That Could Fight Addiction
Health
Hugging Is an Evolutionary Tool for Survival
Health
The Other Magic Mushroom: Why a Canadian Startup Is Suddenly Interested in the Fungus From Super Mario
Health
How To Avoid Food-Borne Illness
Sponsored
Health
Leptitox Reviews - Is It Worth the Money? (Cheap or Legit?)
Health
What Are The Effects of Delta 8 THC? Here’s the Ultimate Guide
Recommendations From Our Store
My Science ShopCosmos: Possible Worlds
My Science ShopStrange Science
My Science ShopEinstein's Universe
My Science ShopElements Flashcards
Shop Now
Stay Curious
Join
Our List