One company is making a vaccine that is given to cats and stops them from producing allergens. Another is trying to create CRISPR kitties. 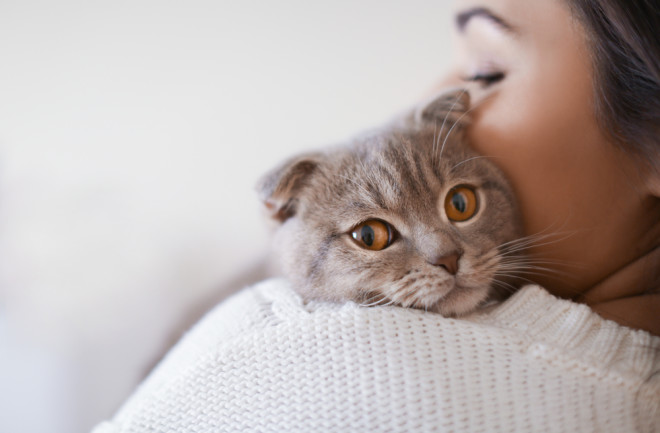 Every year, around 3.2 million cats are placed in U.S. animal shelters, according to the American Society for the Prevention of Cruelty to Animals. There are many reasons why these pets are given up, but one of the most common is allergies. Cats are one of the most common allergy triggers in the world, with at least 10 percent of Americans exhibiting some symptoms. These symptoms can be mild, but they can also cause serious health complications, particularly among younger children who are at risk of developing asthma through prolonged exposure. And while there are a variety of ways to treat allergies, most of them only address the symptoms rather than removing the underlying cause. The only way to do that, for now, is to remove the cat itself.

“With any disease, you want to address the root cause, rather than just the symptoms, and that's all that is available today,” says Gary Jennings, a biochemist and the CEO of Swiss biotech company HypoPet. “It's suboptimal.”

Luckily for cat lovers, researchers and companies like HypoPet are working on alternative treatments to cat allergies –– ones that treat the cat instead of the human. And although this research is still in its beginning phases, don’t be surprised if cat allergies become a thing of the past sometime soon.

HypoPet, which spun off from research conducted at the University of Zurich in 2014, aims to prevent household cats from producing a key allergen called Fel d 1. It’s a protein produced in various cat glands and is found in their saliva and on their skin. Fel d 1 is the primary cause of allergic reactions to cats among humans.

HypoPet is working on an experimental vaccine called Fel-CuMV (or HypoCat), which incorporates particles from the cucumber mosaic virus attached to a Fel d 1 protein. The vaccine tricks the cat’s immune system into recognizing the protein as a foreign intruder. This induces the production of antibodies that neutralize the Fel d 1 proteins, essentially eliminating their presence in the cat’s body.

Although HypoPet has been developing this treatment since 2014, in the past year they’ve made accelerated progress toward their vaccine. In July 2019, they published a paper in the Journal of Allergy and Clinical Immunology reporting the results of a number of studies they did on the vaccine’s effects on 70 cats, showing that it successfully induced a sustained antibody response in the felines. They also noted that cat saliva samples contained lower concentrations of the allergenic protein, and that overall, the vaccine didn’t seem to harm the animals.

In March of this year, they published the results of a long-term clinical study on 10 cat owners with feline allergies. The cats were vaccinated, and over the course of two years, the symptoms of the human allergy sufferers were tracked. Cat owners showed a significant reduction in their allergy symptoms, and they could spend longer periods of time directly interacting with their cats before developing symptoms, according to the work published in the journal Viruses.

Recently, HypoPet began working with a new business partner. Jennings declined to name names, but says they’re one of the top global animal health companies. They hope to get the vaccine on the market in the next two to three years, Jennings adds.

Jennings says the HypoCat vaccine is a practical solution for cat owners with allergies because of how long the antibiotic reaction lasts. After the initial vaccination, cats will only have to be vaccinated roughly every six months to a year to maintain the effects. This treatment is a stark contrast to decongestant sprays or daily allergy pills, which require consistent use to effectively prevent allergy symptoms.

“We think it’s going to be cost-effective and convenient for the cat owner,” Jennings says. “And we know it’s safe and well tolerated for the cat.”

Another preventative method for cat allergies is to delete the gene that produces Fel d 1 proteins altogether, effectively making the cat completely hypoallergenic. This method is being tested by a Virginia-based company, Indoor Biotechnologies, which researches and develops tools to measure different types of indoor allergens. President and CEO Martin Chapman, a former professor of microbiology at University of Virginia, says the company has been researching CRISPR gene-editing software in cats for the last two years.

The project, known as CRISPR Cat, is being led by biologist Nicole Brackett. Brackett says her research started by sequencing Fel d 1 from 50 cat tissue samples, and finding DNA regions that were consistent among the cats and were suitable to test CRISPR editing on. Brackett then tested the CRISPR technology on a feline kidney cell line, using 10 different synthetic RNA guides targeting the genes that produce Fel d 1. The project ended with a 50 to 55 percent success rate in editing the genes out of the samples. Because the team was only working with cells, no cats were harmed.

“50 to 55 percent efficiency is great,” Brackett says. “Especially because the cell type that we were using was not a very easy cell type to work with, and the target is a bit difficult as well. So that was a great sign.”

Brackett says her team is currently working on acquiring and testing samples from different types of cats, such as big cats or wild cats, to compare the genetic structures and Fel d 1 production of different feline species. Because there isn’t that much research on cat allergens, Brackett hopes the project can shed more light on how Fel d 1 is produced among all feline species, as well as house cats.

Brackett says there is some concern that CRISPR technology could cause negative effects in the cats. The genetic scissors they use called Cas9 is only intended to cut or modify a specific part of the DNA, but it’s possible that it could change another part of the genome and cause unanticipated mutations in the cat. Fortunately, Brackett says there are several newly developed tools that improve gene-editing accuracy, which has helped to minimize the risk CRISPR has on its subject.

Chapman says the CRISPR technology has a major advantage over other forms of potential allergy treatments because it’s the only method that removes allergy risk permanently. Others only reduce allergen levels temporarily, whereas CRISPR editing allows for the complete elimination of Fel d 1 proteins from a house cat.

Furthermore, Chapman says the team hopes that their CRISPR research can determine the function of the protein in the cat, and why it is produced in the first place.  “If that were the case, then one could look for other alternatives to control the allergen,” Chapman says. “So that, big picture, is what we’re looking at.”