The Spittoon points to a new paper, Drawing the history of the Hutterite population on a genetic landscape: inference from Y-chromosome and mtDNA genotypes, which I've been meaning to look at more closely. Unlike some attempts to use genetics to illuminate questions about the human past here the historical record is rather complete. The 16th century was the high tide and maximal efflorescence of German Protestantism. Not only were vast swaths of what we think of as redoubts of German Catholicism in the Austrian lands brought into the Protestant fold, but the diversity was also at a peak, as the religious status quo was in flux and indeterminate. In the 17th century the Hapsburg Emperors won back the Austrian lands for the Roman Catholic Church,* while Lutherans and Calvinists began turning on the smaller radical sects, generally Anabaptists, in their midst. Groups like the Amish and the Hutterites are echoes of that time, taking root and flourishing in the United States because of its laissez-faire attitude toward religious belief and practice. The Hutterites are also of note because for a long time they were reputedly the highest fertility population in the world. That explains why their numbers have increased by a factor of 30 in the past 150 years, and also points to why they're of genetic interest. Like many sects Hutterites don't accept many converts, so their growth is due to their own fertility. Additionally, the history of the Hutterites in Europe seems to be one of bottlenecks due to persecutions. It's a nice way to see if what one assumes would happen with fluctuating populations did happen when it comes to the genomes of populations. As expected the Hutterites are of Central European origin. In any admixture model where the two parent populations were Central and Eastern European, the Hutterites are 80% Central European. But, their mtDNA and Y chromosomal lineages are a restricted subset of the parental populations, and they exhibit a great deal of genetic novelty. I think this is visually obvious when you look at the Y & mtDNA phylogenies of Hutterites within the context of Central & Eastern European populations. Note how concentrated the Hutterites are in particular branches; they're subsets, but only a slice. 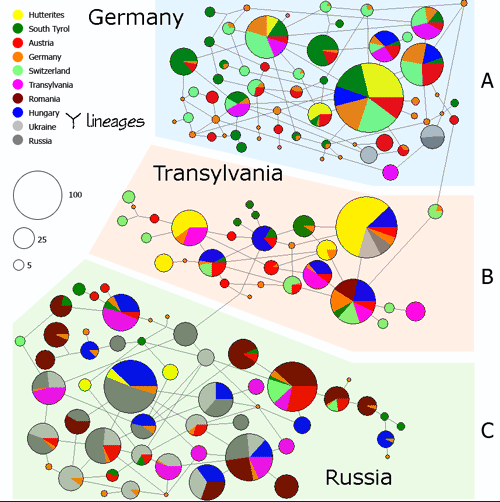 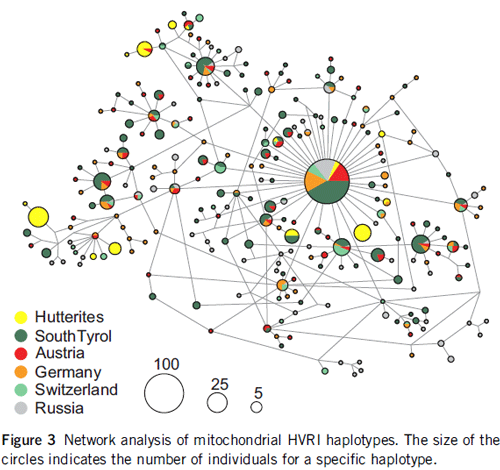 You can also see Hutterite genetic uniqueness on this chart which positions them in relation to other populations as a function of Y chromosomal variation: 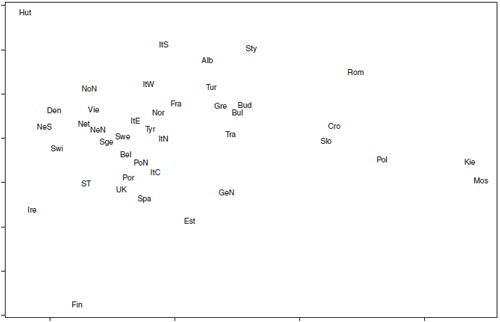 "Hut" are Hutterites. The identity of the other European populations aren't too important, just note that Hutterites are outliers. This sort of positioning is familiar from islanders. Why? Because islands have very low migration from adjacent mainlands, and so build up unique genetic variation (though in the case of the Hutterites they're also relatively homogeneous on the within-group basis, as would be expected from a population which went through severe bottlenecks). Unless there is at least 1 migrant per generation between an island and the mainland then the two populations are liable to start differentiating genetically. Why 1? If the island's population is very small genetic drift is powerful, but 1 individual can quickly equilibrate. If the population is large, 1 individual has little effect, but genetic drift is much weaker proportionally as generation to generation variance in gene frequencies is mitigated. The Hutterites also have the added issue of variations in population size, which reduce effective population and so make stochastic factors, drift, much more powerful. This is because long term effective population is a harmonic mean, so the low bounds have a much bigger effect than the high bounds. An analogy might illustrate. Imagine you have a photocopier. Over successive photocopies the character of the original should degrade, as copies of copies exhibit less than perfect fidelity. Now, imagine that in the sequence of copies one reduces quality during one instance. That quality reduction has enormous effects on subsequent copies, even if quality is increased. When populations go through bottlenecks they imperfectly sample their parent populations and lose a lot of genetic variance. Once they come back out of the bottleneck they're very homogenized, and genetic variance can only be reintroduced through mutation and migration. In the case of the Hutterites their community has been relatively closed. Genetically they're an island. As it happens, they also have novel new mutations, or at least genetic variants not found in the ancestral populations sampled, and at high frequencies at that. And that is why I suggest that the Hutterites are like Icelanders. Hutterites and Icelanders are German and Scandinavian origin populations, with some extra admixture from related groups (Eastern European and Irish respectively), but their unique genetic history and isolation has left an imprint. Why should we care? If you care to project Hutterite growth rates, it's clear that the future belongs to the Hutterites! Note: There is a community of ethnic Japanese Hutterites. Citation: European Journal of Human Genetics (2009), 1-8, doi: 10.1038/ejhg.2009.172 * The Hapsburgs were always Catholic rulers, but by 1600 many of their vassals and subjects had become Protestant, likely the majority. But through a carrot & stick policy Austria, Hungary and Bohemia were brought back to the Roman Catholic fold. Today Protestantism in Hungary is strong in the eastern third of the country, the reason being that these regions were under Ottoman hegemony and so outside of the power of the Hapsburgs.