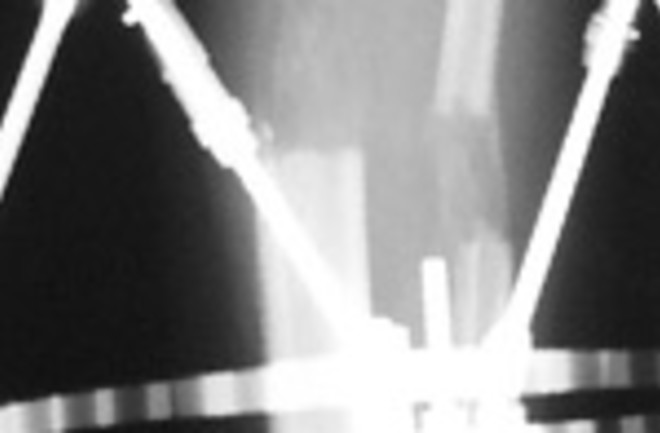 An x-ray showing bones being slowly "stretched." New bone (gray) growsto fill in the gaps between the broken bones. | NULL

A lucrative—if extremely risky—global industry has cropped up to perform a bone-breaking procedure that stimulates growth and can increase height by up to five inches. Doctors in Greece, China, Egypt, India, and Ukraine now offer the six-month procedure for about $15,000, mostly to medical tourists. “There are a lot more clinics popping up internationally, and this is a very worrisome thing,” says Dror Paley, codirector of the International Center for Limb Lengthening in Baltimore, Maryland. “I’ve seen disasters from some of them. One kid treated in India hasn’t walked in years. They destroyed his feet.”

Dean Cole, a trauma surgeon at the Florida Hospital Fracture Care Center, has repaired problems from about 10 operations he didn’t do; the first of these patients showed up only two years ago. “A man treated in Russia had bone infections, huge quantities of pus, and bones that didn’t heal and were crooked,” he says. Last November, the Xinhua news agency reported that the Chinese health ministry banned cosmetic leg lengthening after 10 people were disfigured in 2005.

A patient before (left) and after (right) a leg-lengthening procedure. | NULL

In the United States, the technique is primarily used to correct asymmetries when birth defects or injury make one limb longer than the other. But at least three clinics here, including Paley’s, occasionally do it to make people taller. During the procedure, a surgeon drives four to eight steel pins straight through the lower legs, anchors them to cylindrical frames, and breaks each bone with a chisel. The patient then turns screws on the frame, extending the broken bone 1/30 of an inch each day. New bone forms to fill in the gaps, and—when the stretching is done gradually—the blood vessels, muscles, nerves, and tendons keep pace. “It was probably worse than giving birth to seven kids at the same time,” says Akash Shukla, a 20-year-old engineering student who went from 4 feet 11½ inches to 5 feet 2 inches. “I would do it again in a heartbeat; it has changed my life completely.”