Humans Have Hosted Tuberculosis Bacteria for at Least 9,000 Years 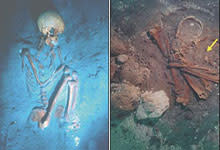 A genetic analysis of two 9,000-year-old human skeletons found off the coast of Israel reveal that the Neolithic people were infected with tuberculosis, making them the earliest known TB cases to be confirmed with genetic testing.

The bone discovery contradicts the long-held theory that human TB evolved from cattle strains around the time of animal domestication, says [study coauthor] Helen Donoghue.... Rather, high population densities could have made it easier for the disease to spread [New Scientist].

The skeletons of a mother and child were found amidst other artifacts of a Neolithic village, called Atlit-Yam, which is now covered by the Mediterranean Sea.

A roughly 25-year–old mother had apparently passed on the bacterial infection to her 1-year–old child, after which they both died and were buried together.... Salt water, sand and clay had covered the bodies, providing excellent conditions for bone preservation. Atlit-Yam was located within a coastal marshland before its immersion by the rising ocean [Science News].

Researchers noticed lesions on the bones that are characteristic of TB, and were able to extract DNA from the infection-damaged spots. Their analysis revealed genetic sequences that matched the DNA of Mycobacterium tuberculosis, the main bacterial strain of human TB. Says Donoghue:

"What is fascinating is that the infecting organism is definitely the human strain of tuberculosis, in contrast to the original theory that human TB evolved from bovine TB after animal domestication" [Telegraph].

While the Neolithic people of Atlit-Yam had domesticated cattle, researchers believed they hadn't yet begun dairying; the earlier theory assumed that TB spread from cows to humans through the consumption of infected milk. The findings, published in the journal PLoS ONE, push back the earliest confirmed date of human TB infection by 3,000 years; previously, the

But in the absense of DNA evidence, some scientists are skeptical of the Homo erectus case. Related Content: 80beats: Controversial Study Links IMF Loans to a Rise in Tuberculosis Deaths The Loom: The Tubercular Hominid DISCOVER: Old Disease in the New World Image: Tel-Aviv University