How to Turn a Spinach Leaf into Beating Heart Tissue 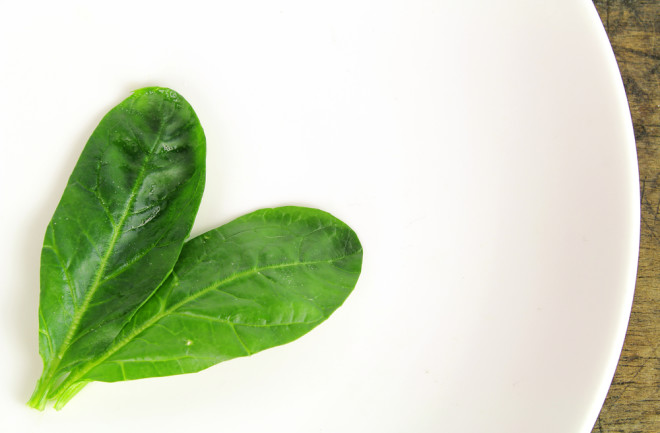 (Credit: Shutterstock) That spinach on your plate deserves more credit. Not only is it packed with folic acid and other health benefits, it could also help scientists regenerate human tissue.

One of the biggest obstacles in the field of organ regeneration is scaling up production from tiny samples in a petri dish to full-fledged organs. One of the limiting factors is constructing a working vascular system to transport blood and nutrients throughout the developing tissues. Current bioengineering methods, such as advanced 3D-printing techniques, aren’t refined enough to build the complex, branching network of capillaries that can narrow to the width of a single blood cell. But Glenn Gaudette, a biomedical engineer at Worcester Polytechnic Institute, and colleagues turned to another source for circulatory scaffolding: spinach leaves.

Researchers use a detergent to strip the cellular material from a spinach leaf. (Credit: Worcester Polytechnic Institute) Researchers used a process called decellularization to strip plant cells from the spinach using detergent, which left behind the scaffolding of its vascular channels. Then, researchers embedded human heart cells to the framework where they grew and started pumping. The nutrient transport system in the spinach life was small and sturdy enough to transport microbeads, which the researchers used as mock blood cells, through layers of developing cardiac cells. [embed]http://media.eurekalert.org/multimedia_prod/pub/media/136268_web.mp4[/embed] The team reported its findings in a paper published this week in the journal Biomaterials. "We have a lot more work to do, but so far this is very promising. Adapting abundant plants that farmers have been cultivating for thousands of years for use in tissue engineering could solve a host of problems limiting the field," says Gaudette.

In addition to their successes with spinach leaves, researchers also performed the same renovation with parsley, wormwood and peanut roots, all of which produced viable tissue specimens. Researchers are confident that this technique could one day be used to grow healthy human organs or regenerate damaged body tissue. Aside from the clear health implications, stripping plants to grow organs would also prove cost effective, as it would eliminate reliance on expensive regeneration processes and the associated synthetic materials.