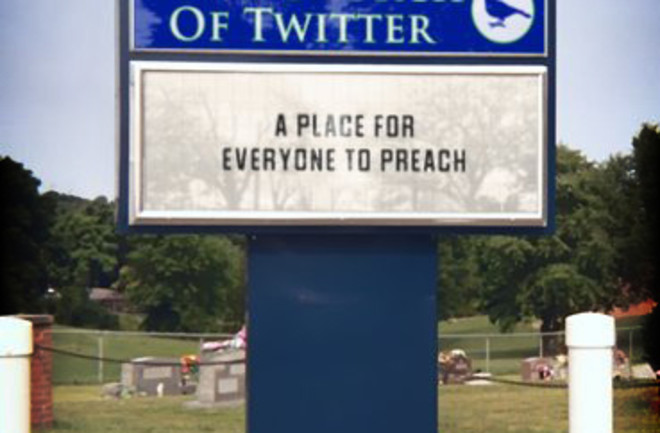 Photo: flickr/wiselywovenIf you've ever wanted to tell whether someone is a Christian or an Atheist just by reading their Twitter feed, you're in luck. In this study, the researchers analyzed nearly 2 million tweets from Christians and Atheists. To identify the groups, they chose people who followed noted Christian or Atheist public figures: "The five Christian public figures were Pope Benedict XVI (@PopeBXVI), Dinesh D’Souza (@DineshDSouza), Joyce Meyer (@JoyceMeyer), Joel Osteen (@JoelOsteen), and Rick Warren (@RickWarren). The five atheist public figures were Richard Dawkins (@RichardDawkins), Sam Harris (@SamHarrisOrg), Christopher Hitchens (@ChrisHitchens), Monica Salcedo (@Monicks), and Michael Shermer (@MichaelShermer)." The researchers then did textual analyses of tweets from the two groups. They found that "Christians express more happiness than atheists in everyday language... [and]...were more likely to mention social processes that suggest stronger relationships and support networks. Simultaneously, atheists were more likely to use 'insight' words (e.g., 'think,' 'reason') that in turn predicted decreased happiness." So, there you go. Happy Tweets: Christians Are Happier, More Socially Connected, and Less Analytical Than Atheists on Twitter "We analyze data from nearly 2 million text messages (tweets) across over 16,000 users on Twitter to examine differences between Christians and atheists in natural language. Analyses reveal that Christians use more positive emotion words and less negative emotion words than atheists. Moreover, two independent paths predict differences in expressions of happiness: frequency of words related to an intuitive (vs. analytic) thinking style and frequency of words related to social relationships. These findings provide the first evidence that the relationship between religion and happiness is partially mediated by thinking style. This research also provides support for previous laboratory studies and self-report data, suggesting that social connection partially mediates the relationship between religiosity and happiness. Implications for theory and the future of social science using computational methods to analyze social media are discussed."