How This Bacterial Toxin Kills Antibiotic-Resistant Pathogens Like MRSA

A toxin produced by bacteria can puncture the cell walls of harmful bacteria, killing them. The compounds could be used to combat antibiotic-resistant bacteria. 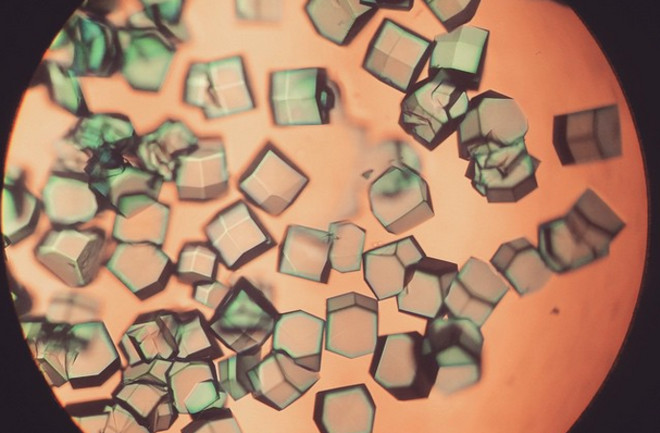 Crystals of a lysozyme. Similar compounds could be used to kill antibiotic-resistant bacteria like MRSA. (Credit: Zanecrc/Wikimedia Commons)

A new way to destroy MRSA, an antibiotic-resistant pathogen, might offer clues to alleviating the antibiotic crisis. In a new study, researchers have found how a bacterial toxin capable of destroying the pathogen does its job.

The compound can punch holes in the cell walls of pathogens like MRSA, killing the cells without the need for traditional antibiotics.

The molecule might not work as a permanent replacement for traditional drugs, says study coauthor Stéphane Mesnage, a biologist at the University of Sheffield. But learning how it punctures cell walls might allow scientists to tweak other bacterial toxins to become equally efficient killers, he says.

“It’s a bit like [the toxin] has been reborn,” Mesnage says.

The threat of antibiotic resistance — bacteria immune to drugs — continues to grow around the world. At least 23,000 people die in the U.S. each year because of a drug-resistant infection. The growing inefficacy of standard pharmaceutical treatments has pushed researchers to consider other therapies. One option might be lysozymes, or molecules that cut open bacteria and kill them. About 50 years ago, researchers found that one particular bacteria that secreted a lysozyme capable of cutting harmful pathogens like MRSA apart.

No one knew how the molecule managed to puncture bacteria, so Mesnage and his colleagues set out to document how the lysozyme attached to and destroyed cell walls. After mixing cell wall fragments and the lysozyme together, the research team tracked how the toxin interacted with its target. The lab work, published today in Nature Chemical Biology, revealed that the lysozyme "walks" over the cell wall to find parts of the barrier that it can puncture. Then, the toxin draws more toxins to the site, concentrating their power to cut a hole in the cell wall, Mesnage says.

The technique could chew through bacteria like those that cause MRSA, providing a non-antibiotic means of combatting the disease. Today, over 20 percent of people who contract a MRSA infection die.

In addition, other bacteria produce cutting molecules similar to the one his lab group studied, Mesnage says. Now that researchers know how this particularly potent agent gets the job done, they might be able to modify related lysozymes to cut up other antibiotic-resistant bacteria in a similar fashion.

Lysozyme therapy might not replace antibiotics completely, Mesnage says. There’s evidence that our immune systems can recognize these molecules and build immunity to them after repeated use.

But as antibiotic resistance becomes more common, these kinds of treatments might be effective options when a patient is desperate for a solution, Mesnage says. “At some point, when we have nothing at our disposal, we’ll have to embrace really novel therapies like this one.”