How the human species kept it together (?)

Yesterday I put up a post where I attempted to use a visual analogy for what I believe might be evolutionary forces operative over short periods of time that result in phenotypic diversification across populations with recent common ancestry. But what about the flip side? In the case yesterday the basic genetic substratum, the preponderance of the genome, was not subject to powerful diversifying forces because only drift was presumably operating over short periods of time. It was on selectively salient slices of the genome where differences came into sharp focus quickly. But there is an inverted process which may also occur: divergence on the neutral genome due to low migration which nonetheless is overlain by "species" wide selective sweeps of alleles of large phenotypic effect. In other words, where before the face was different but the flesh fundamentally the same, now we are considering a situation where the flesh is very different but the face remains invariant. This isn't an original idea of course; much of my thinking has been influenced by evolutionary biologist Loren Rieseberg's work. A plant biologist Rieseberg and colleagues have to face the fact that some species have very low rates of migration, and still maintain species coherency. The basic problem is that when migration rates go below 1 individual between demes then the equilibrating power of gene flow is overpowered by the random walk tendencies of genetic drift.^1 Over time alternative alleles across many loci may fix so that genetic incompatibilities may arise and the gross morphology of populations may begin to diverge a great deal. Rieseberg's idea, drawing upon theoretical work done by Montgomery Slatkin, is that alleles of large effect can sweep through populations and generate cohesiveness across a species through a finite set of loci. So here's my visual analogy: 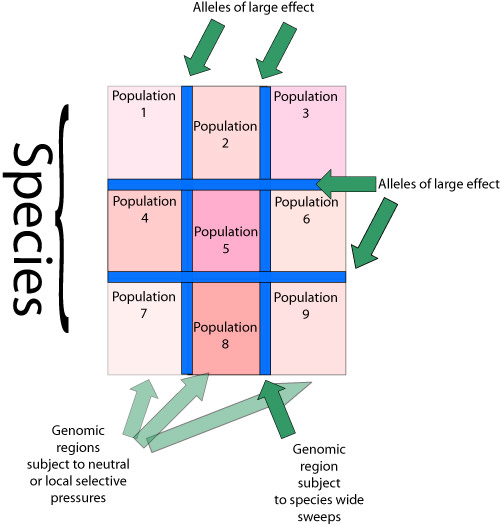 What I'm trying to depict is the tendency of a species to have various populations with alternative and distinctive genetic profiles; all emerging over time through random walk or local directional forces. But, sweeping across and girding these populations are genomic regions of commonality, perhaps on very salient characteristics. Imagine each population as a brick, the regions under powerful unifying selection act as the mortar, keeping the structure together so long as the glue persists. This does not mean that the bricks mysteriously congeal together, they retain their individual characteristics, but scaffolded together they form a higher order structure. 1 - The reason the number stays around 1 is that as populations get larger the proportional deviation due to drift shrinks in terms of alleles frequencies. As populations get smaller the proportion of gene flow per generation induced by 1 migrant increases, counteracting the tendency of drift to become more powerful in small populations.